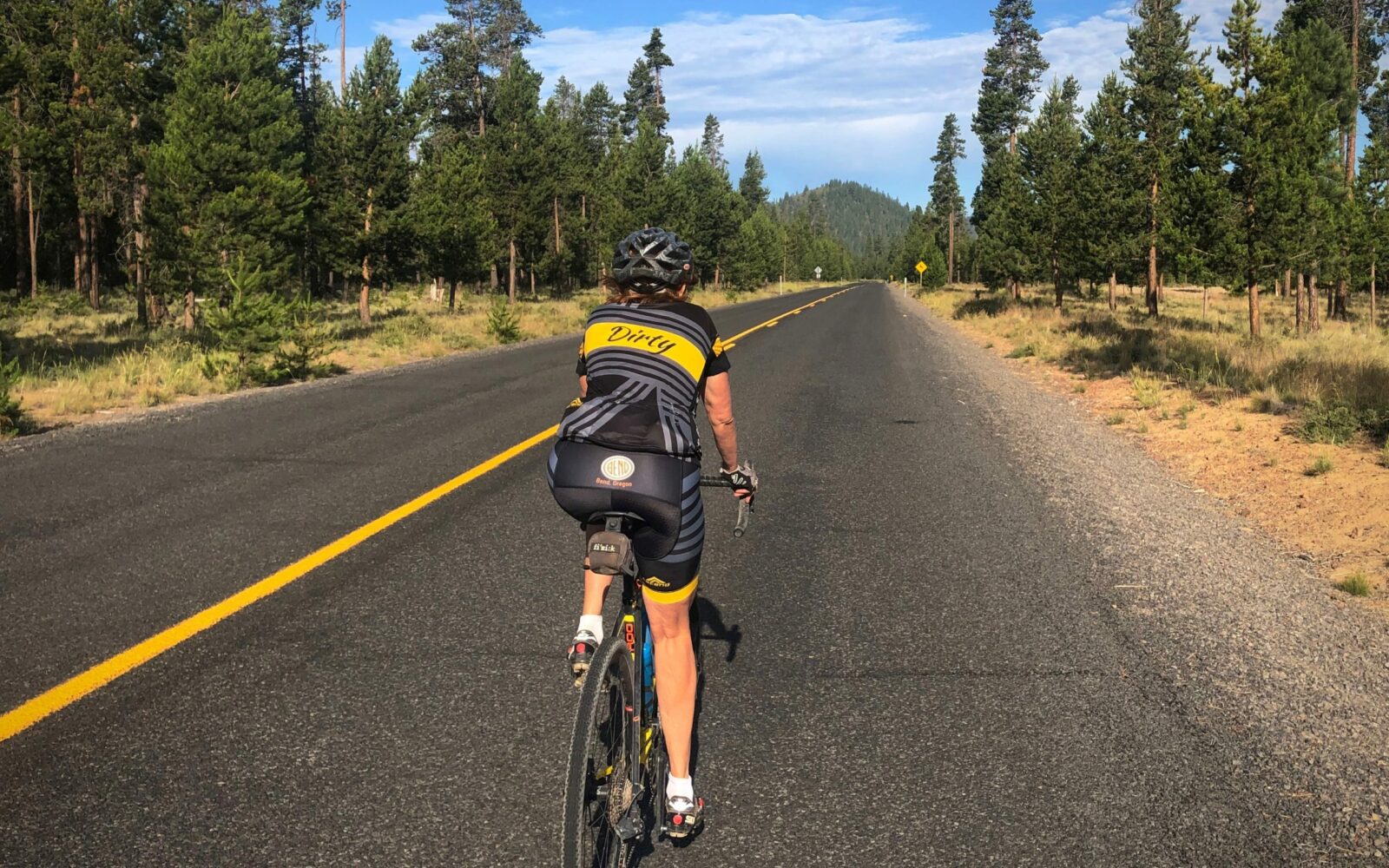 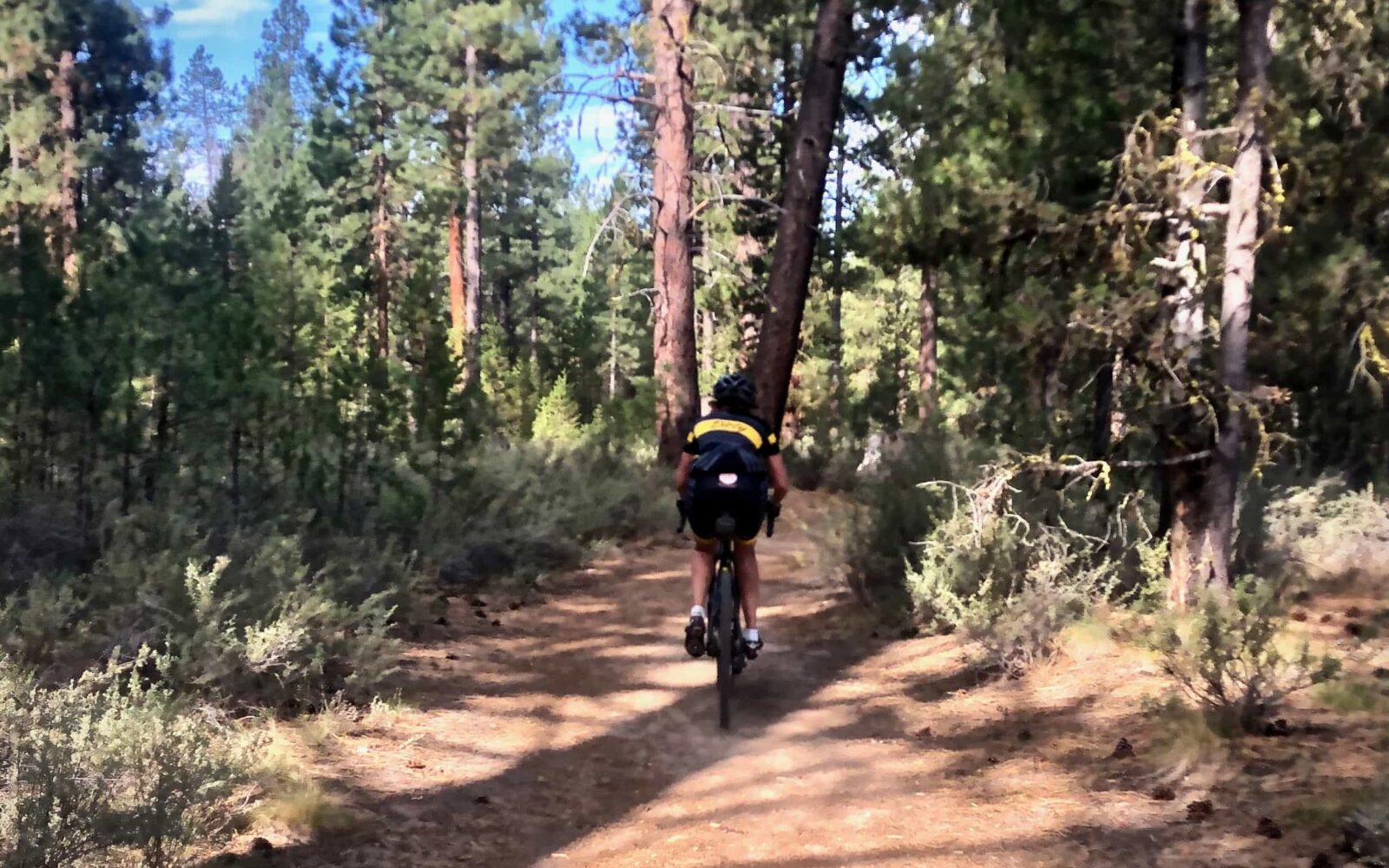 The trail leading into Big Red. 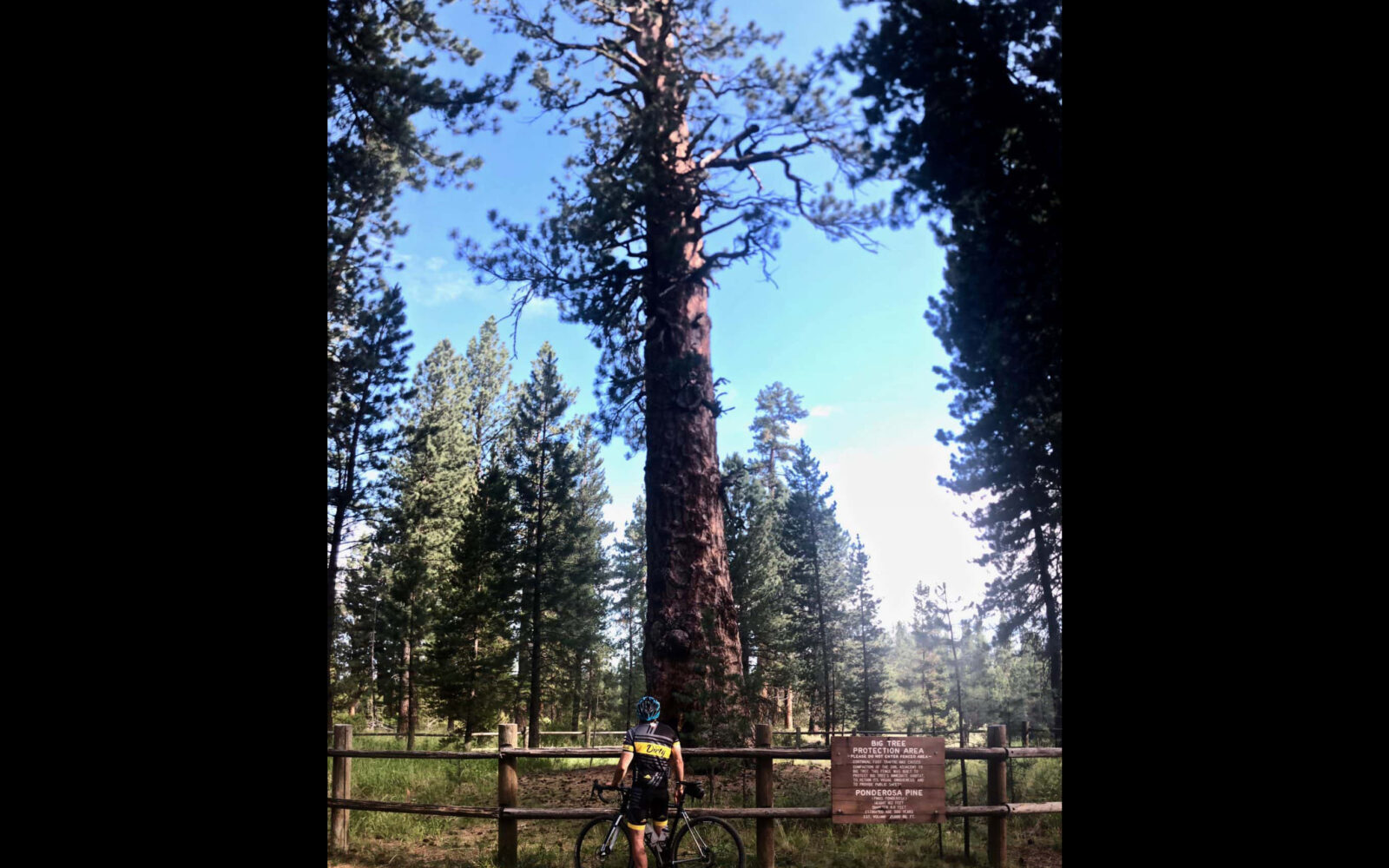 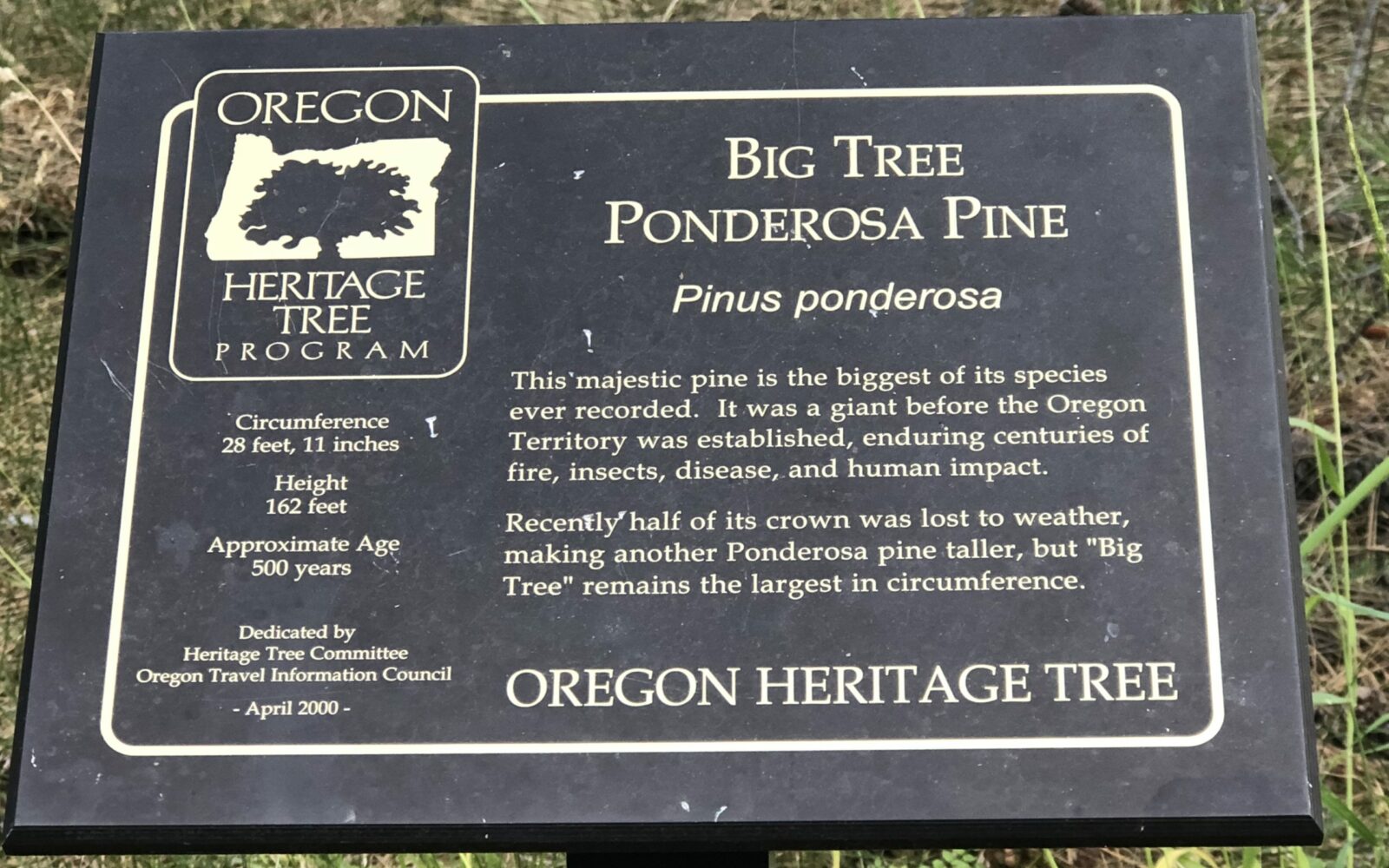 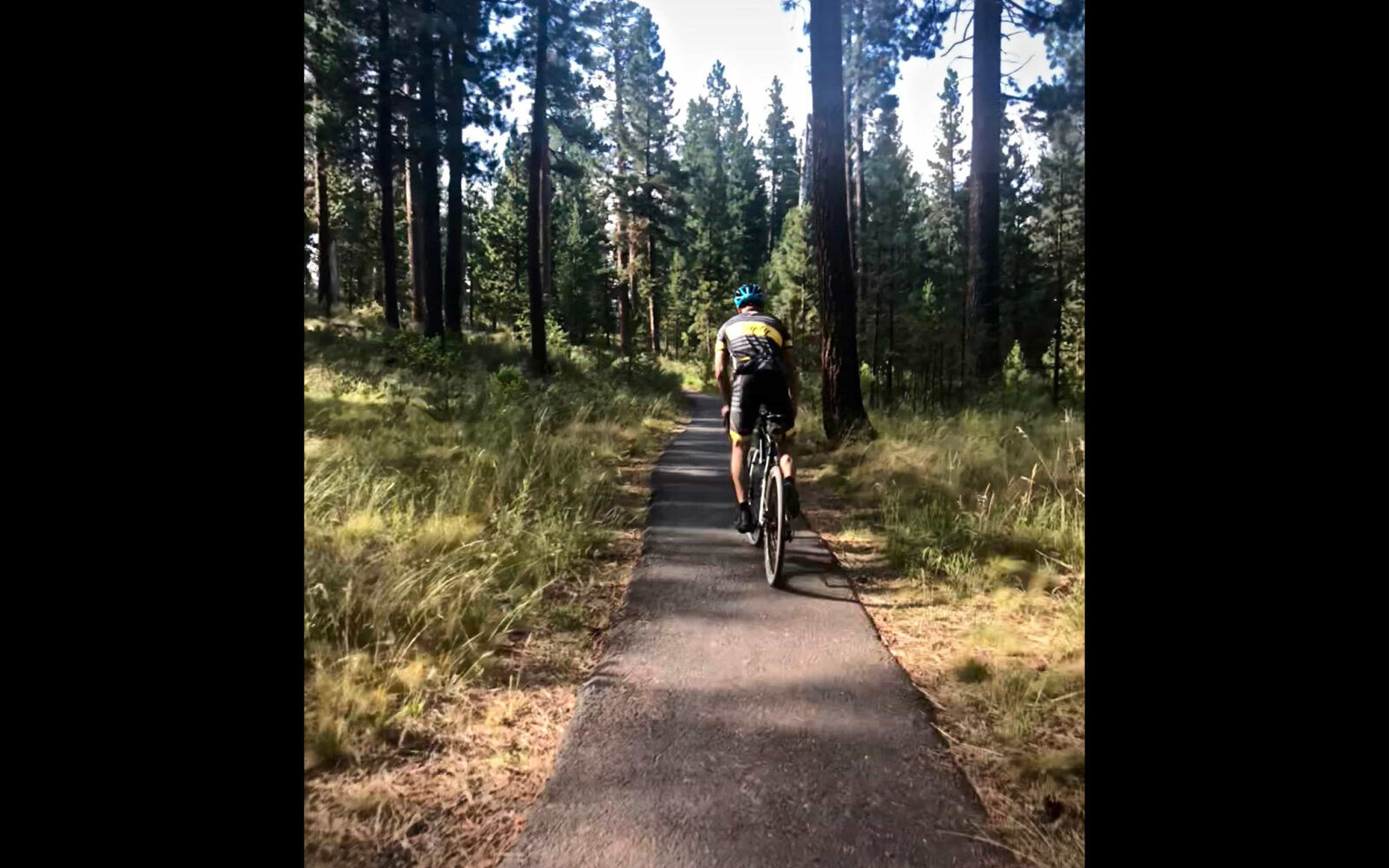 The path exiting from Big Red. 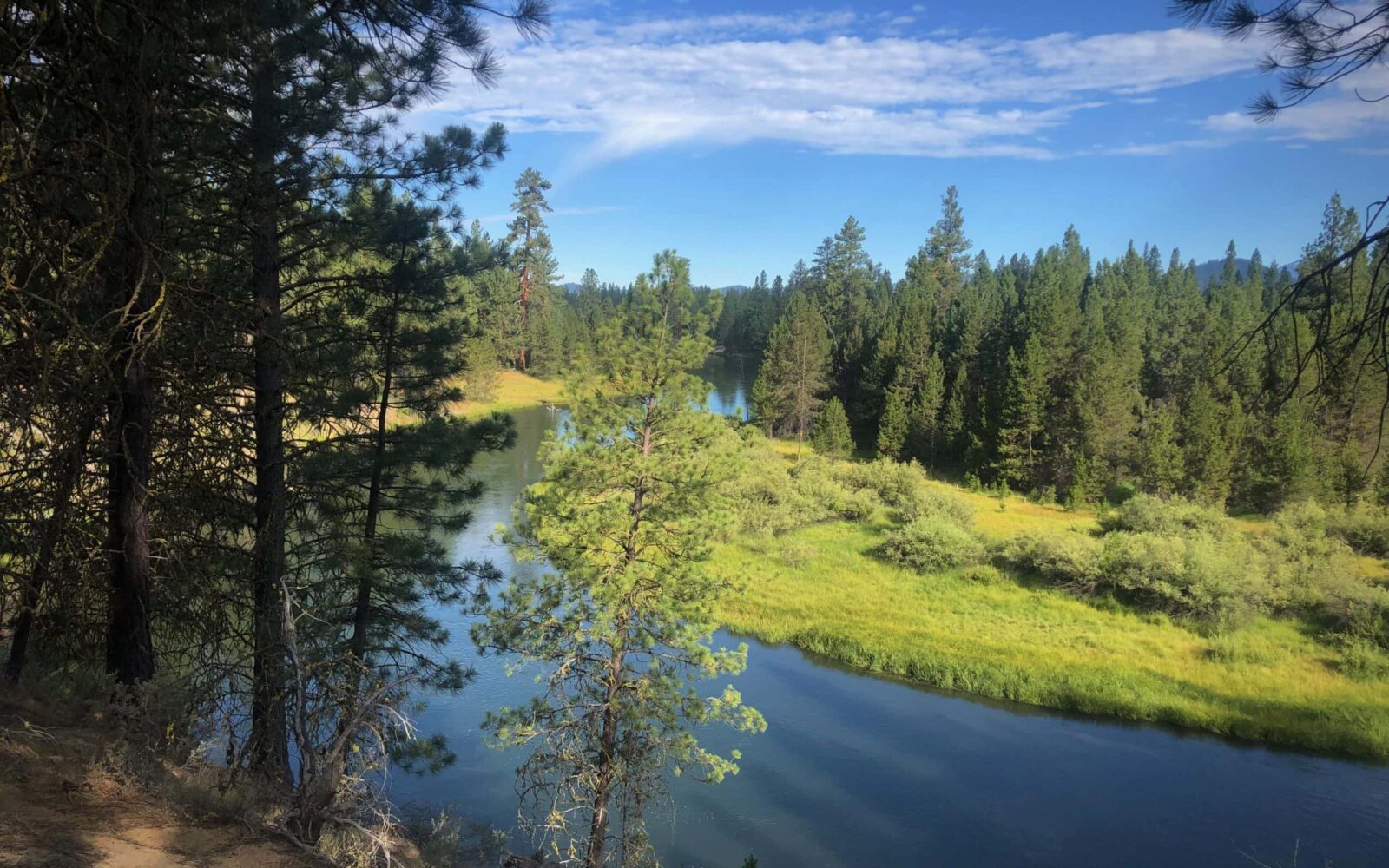 One of many views of the Deschutes River. 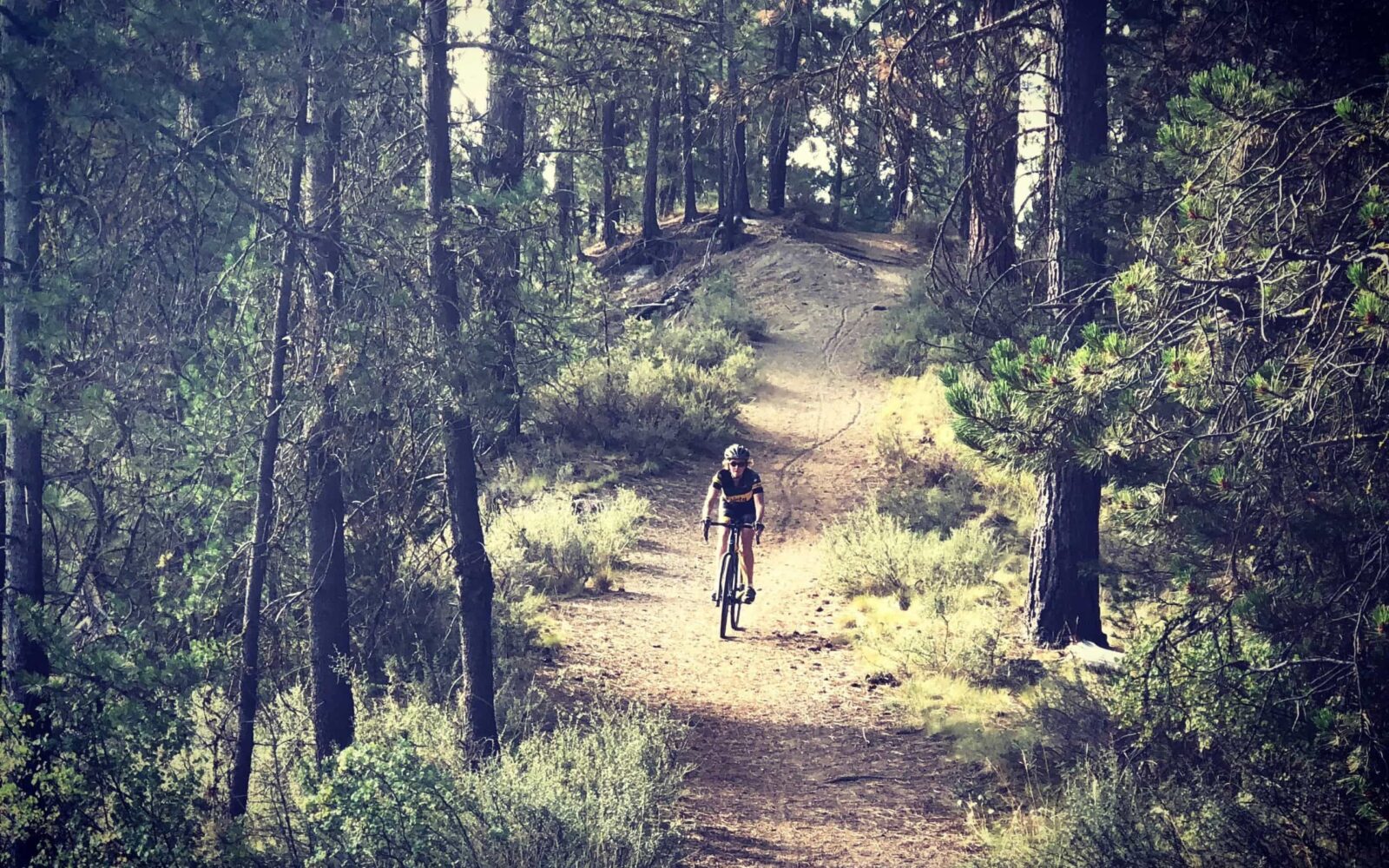 Winding, wide paths for most of the day. 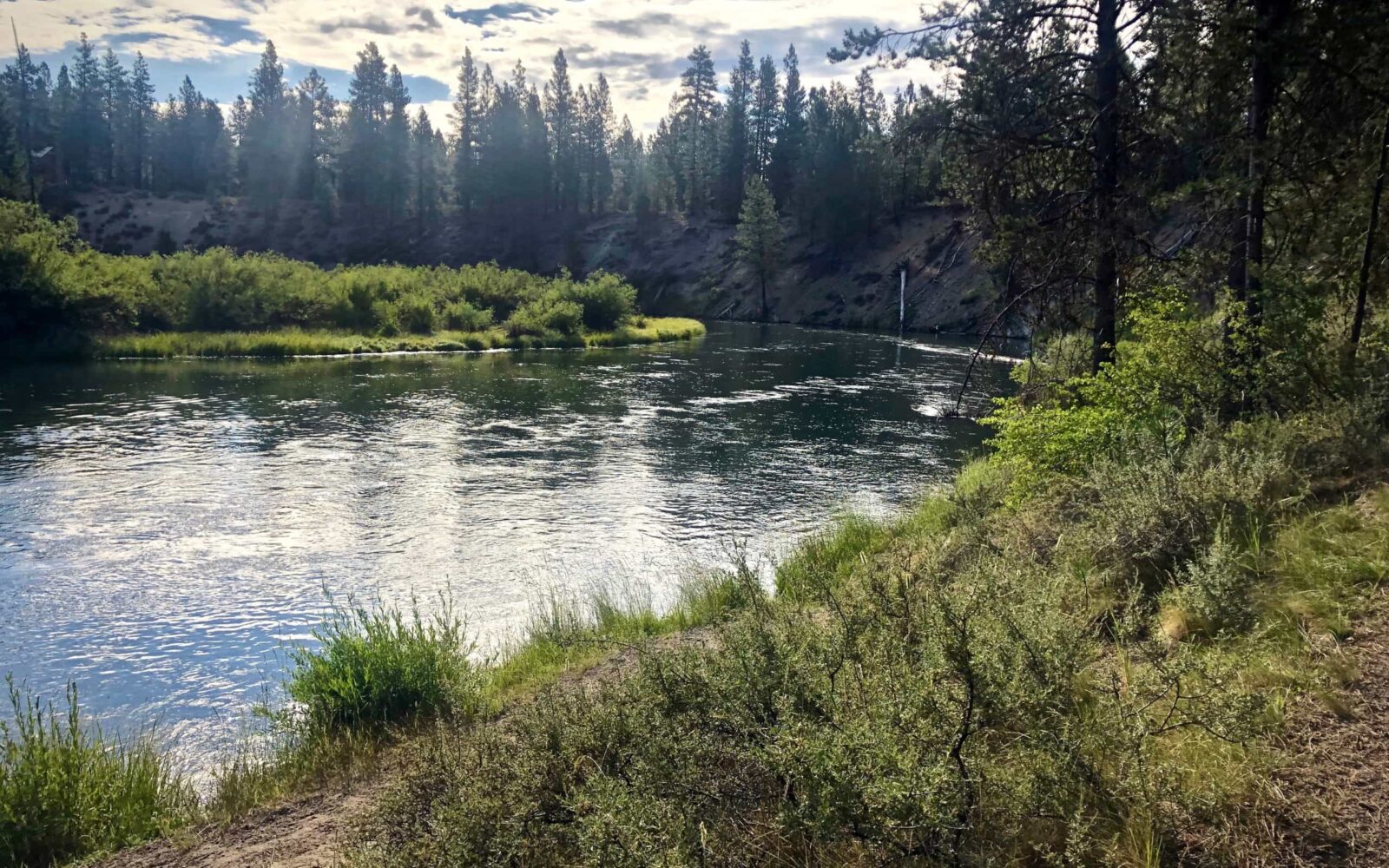 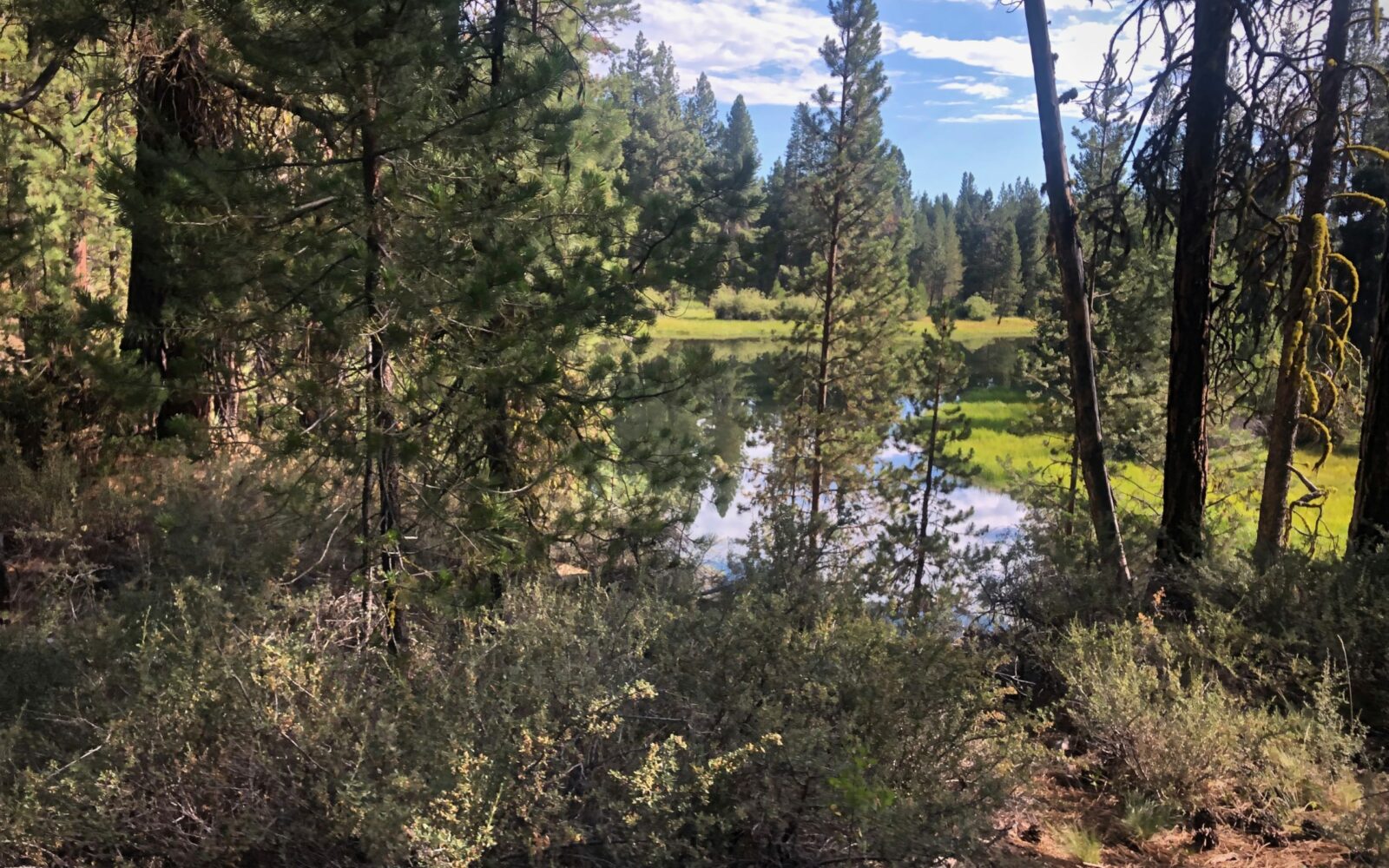 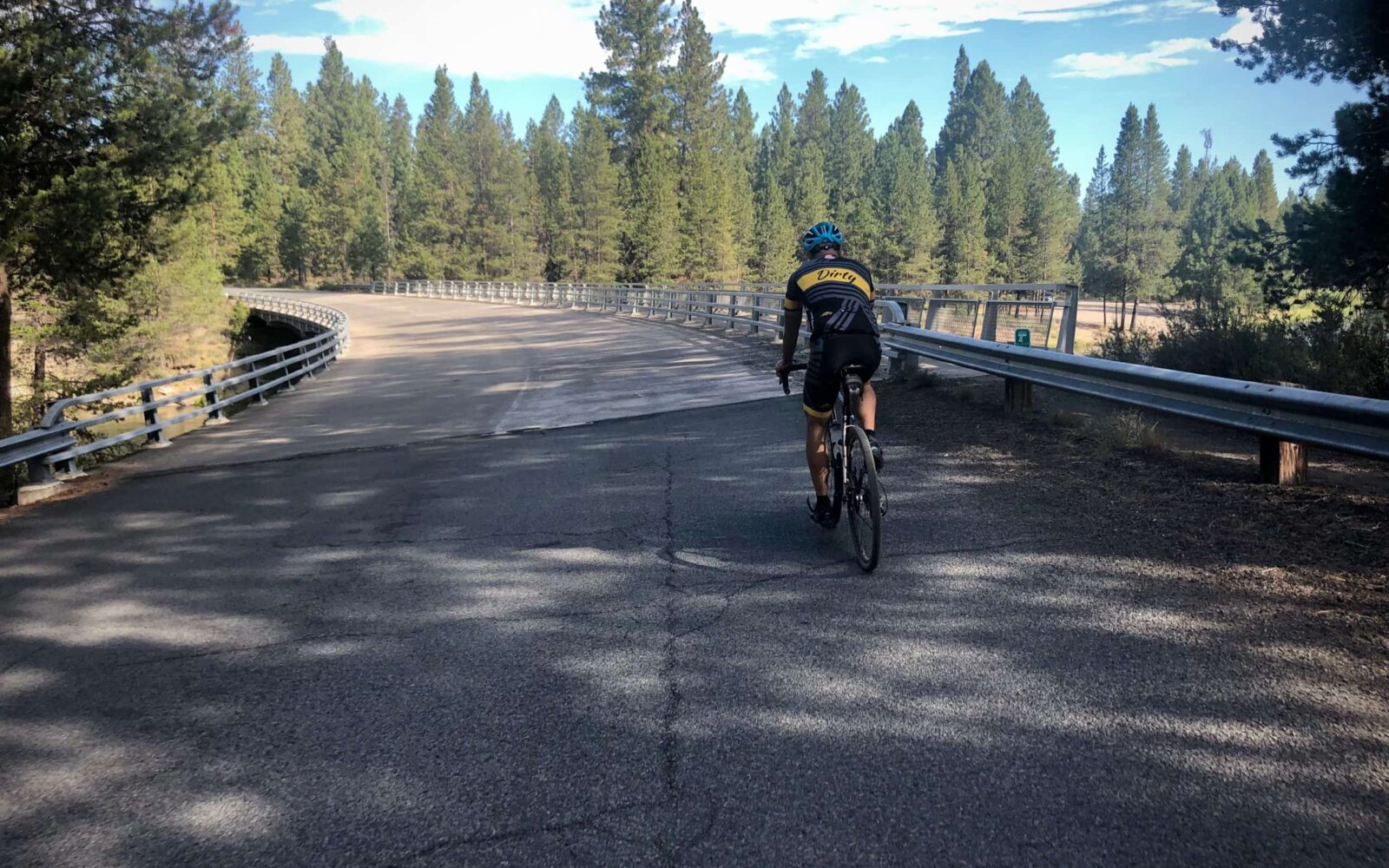 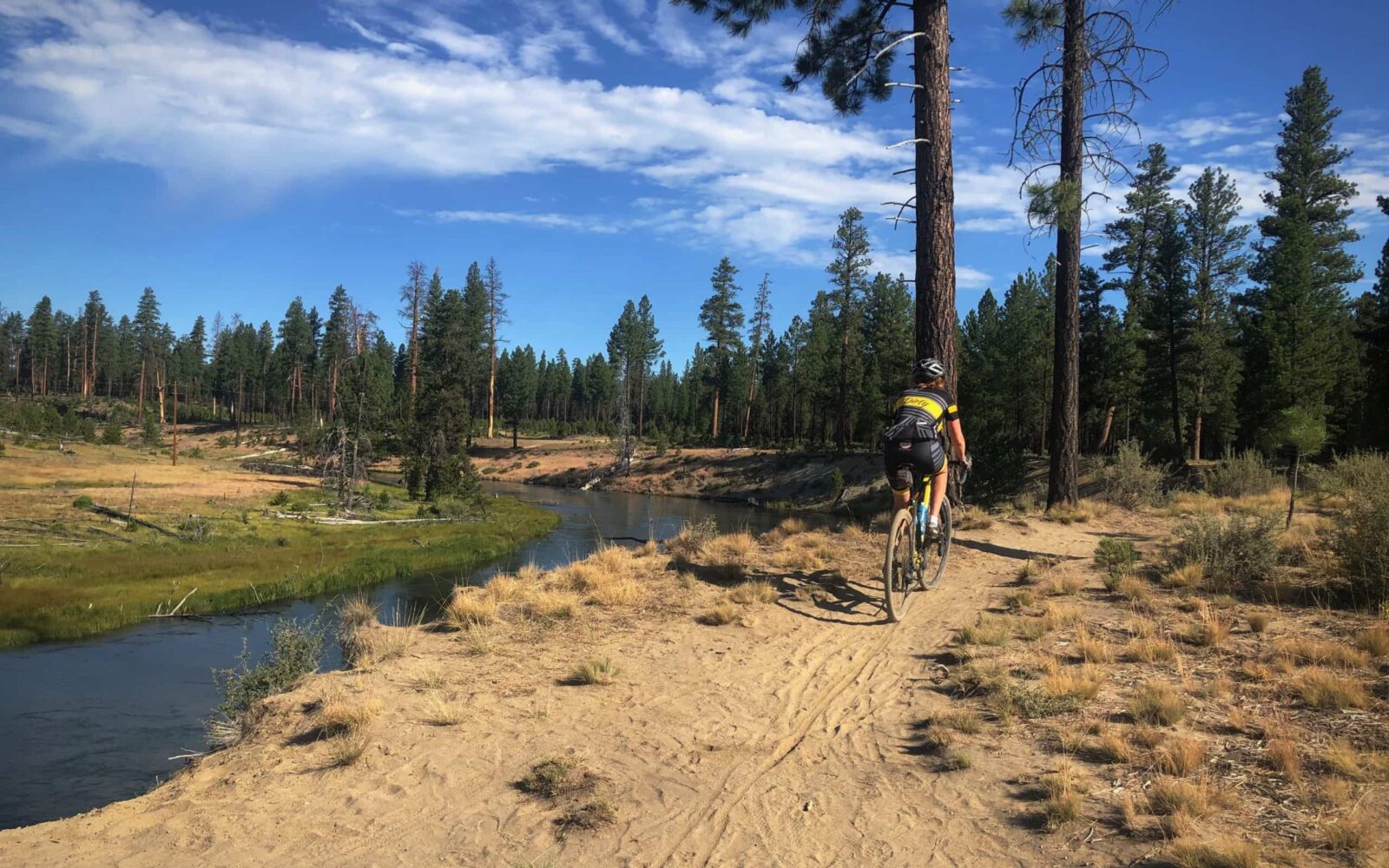 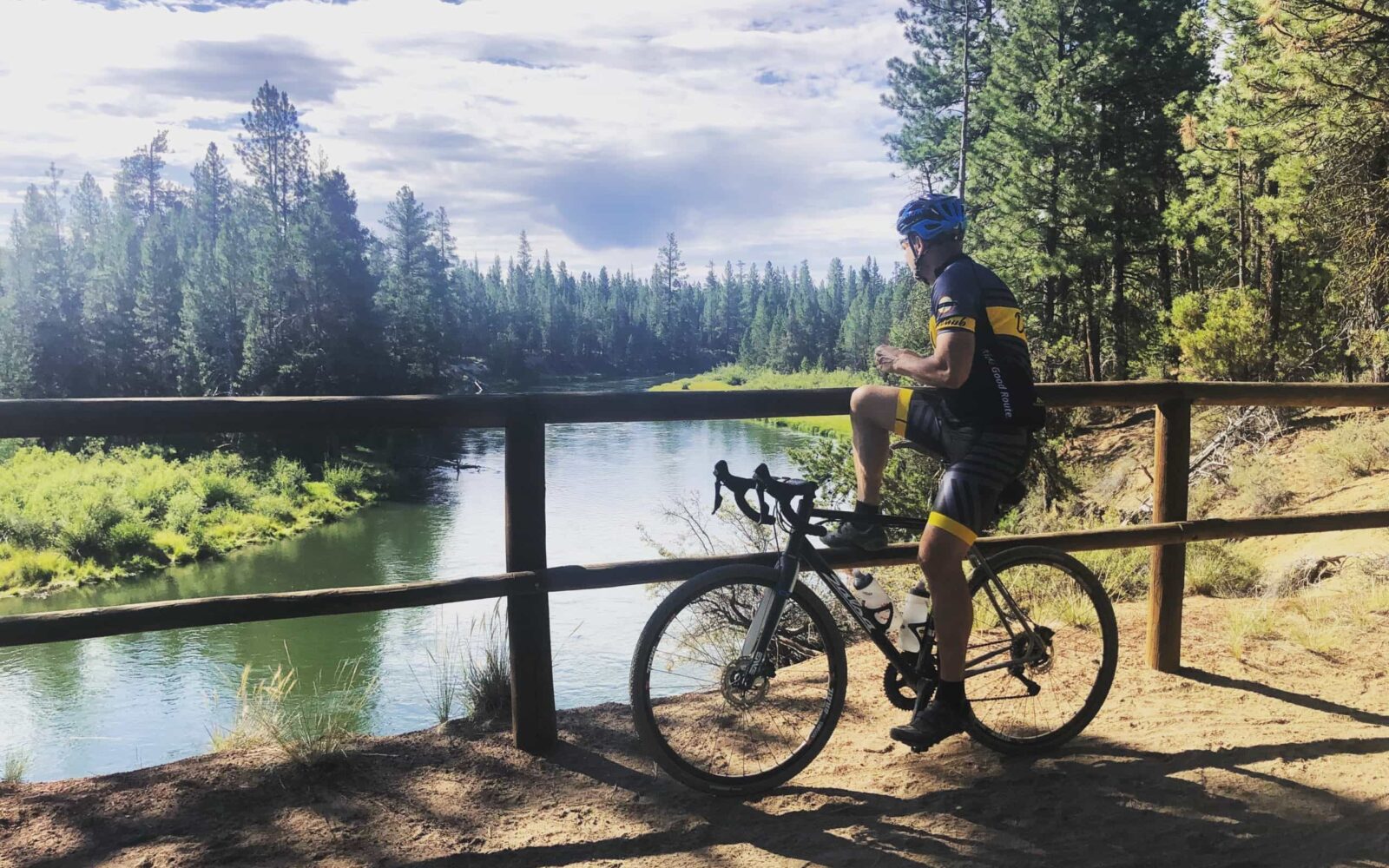 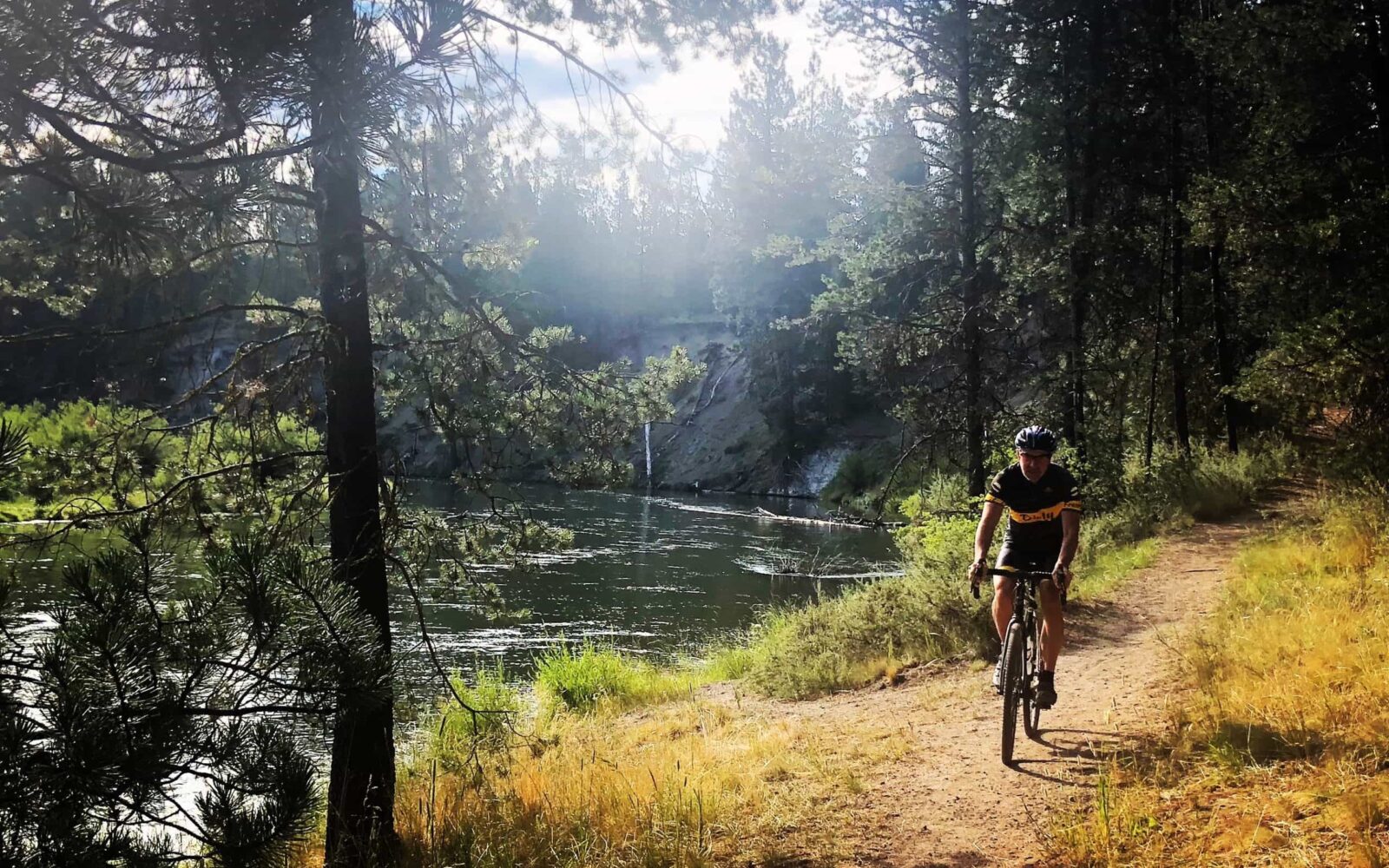 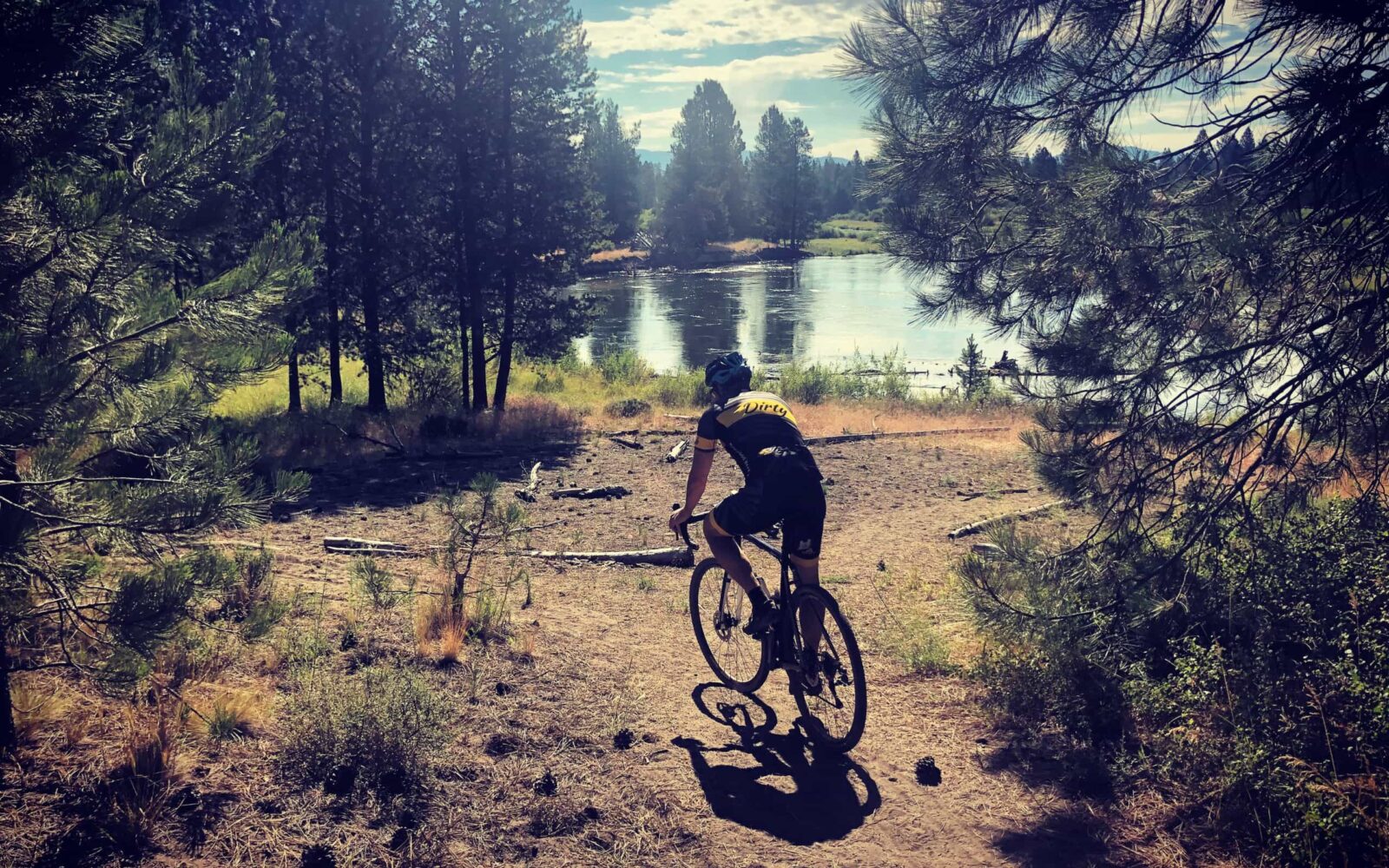 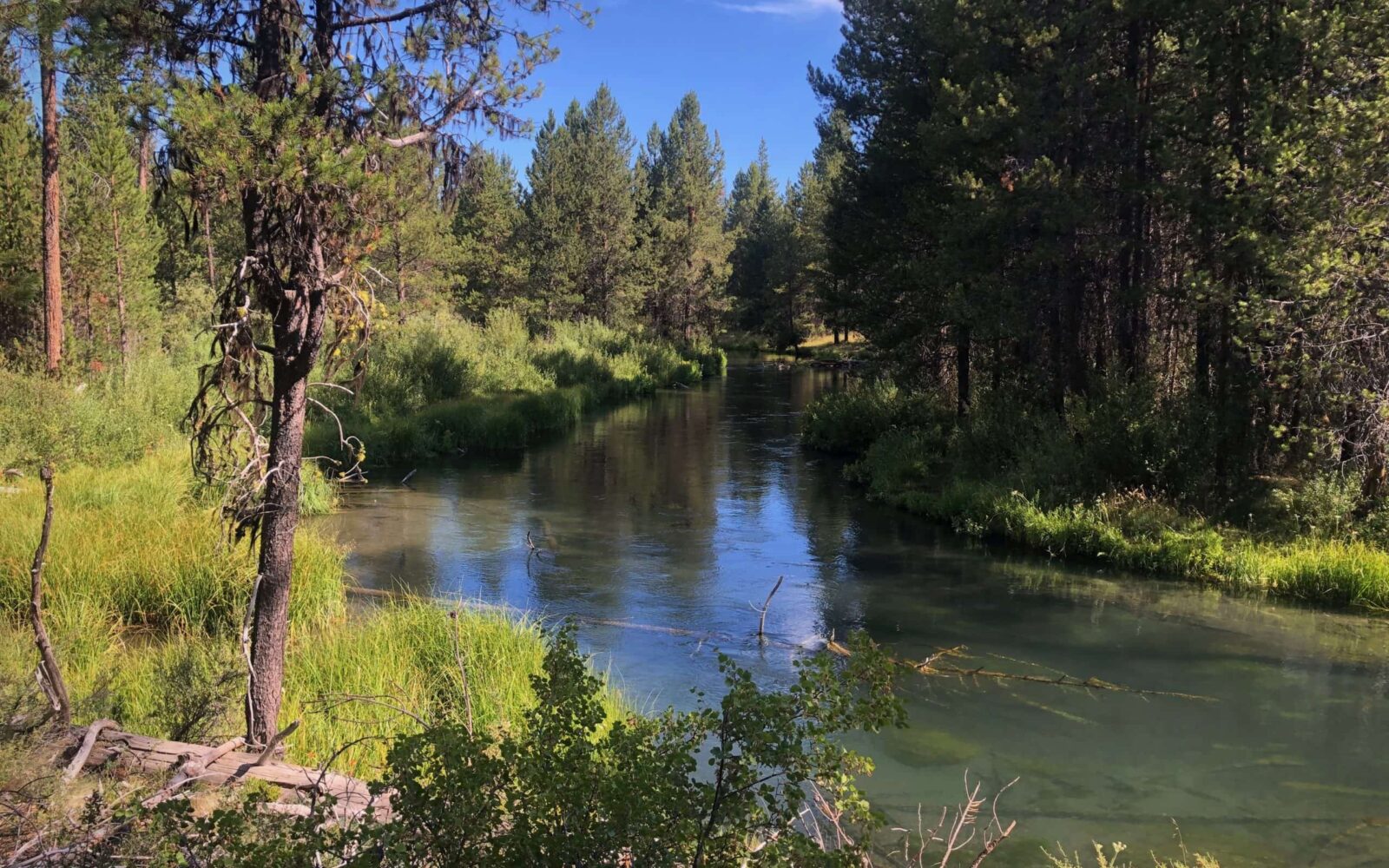 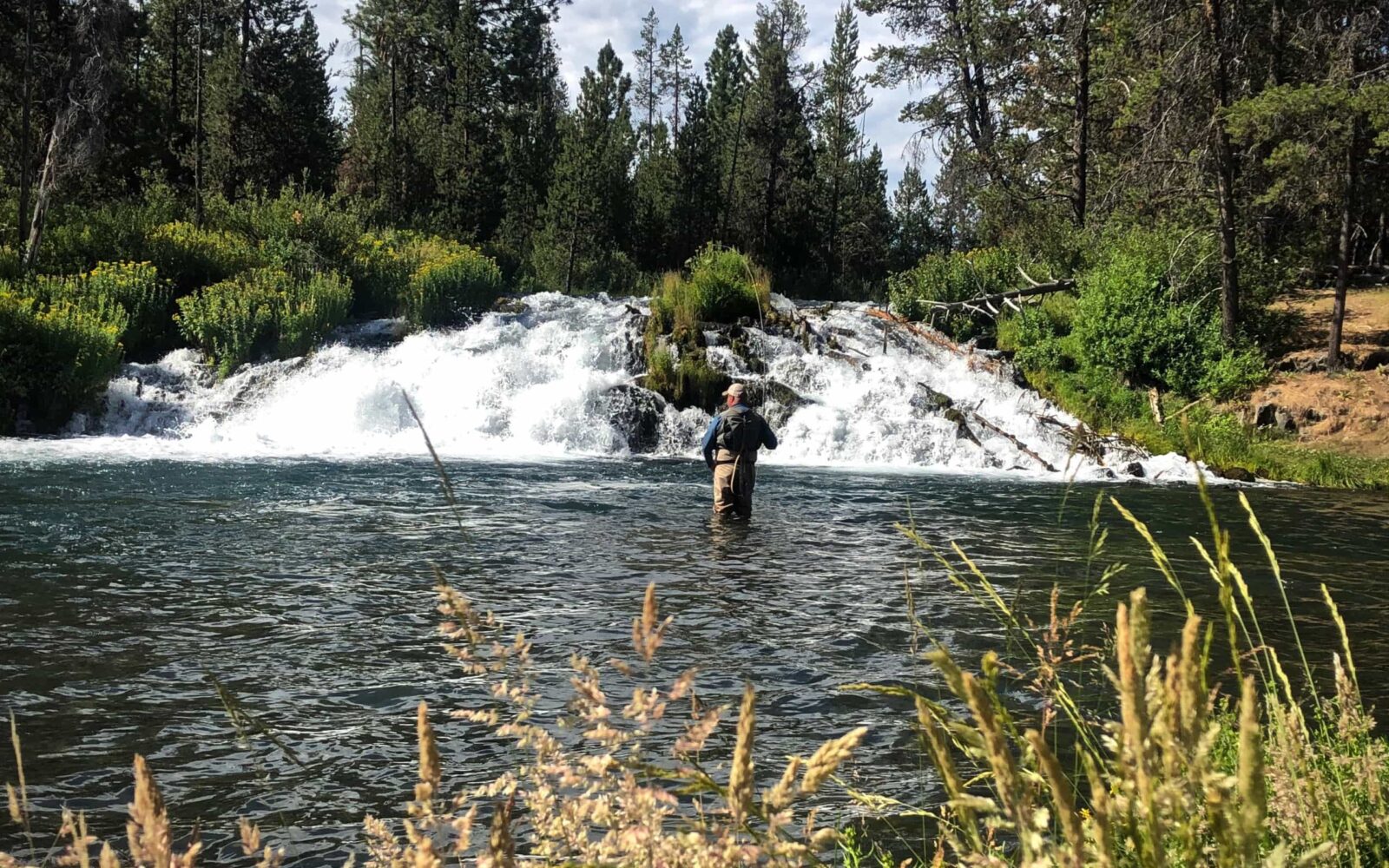 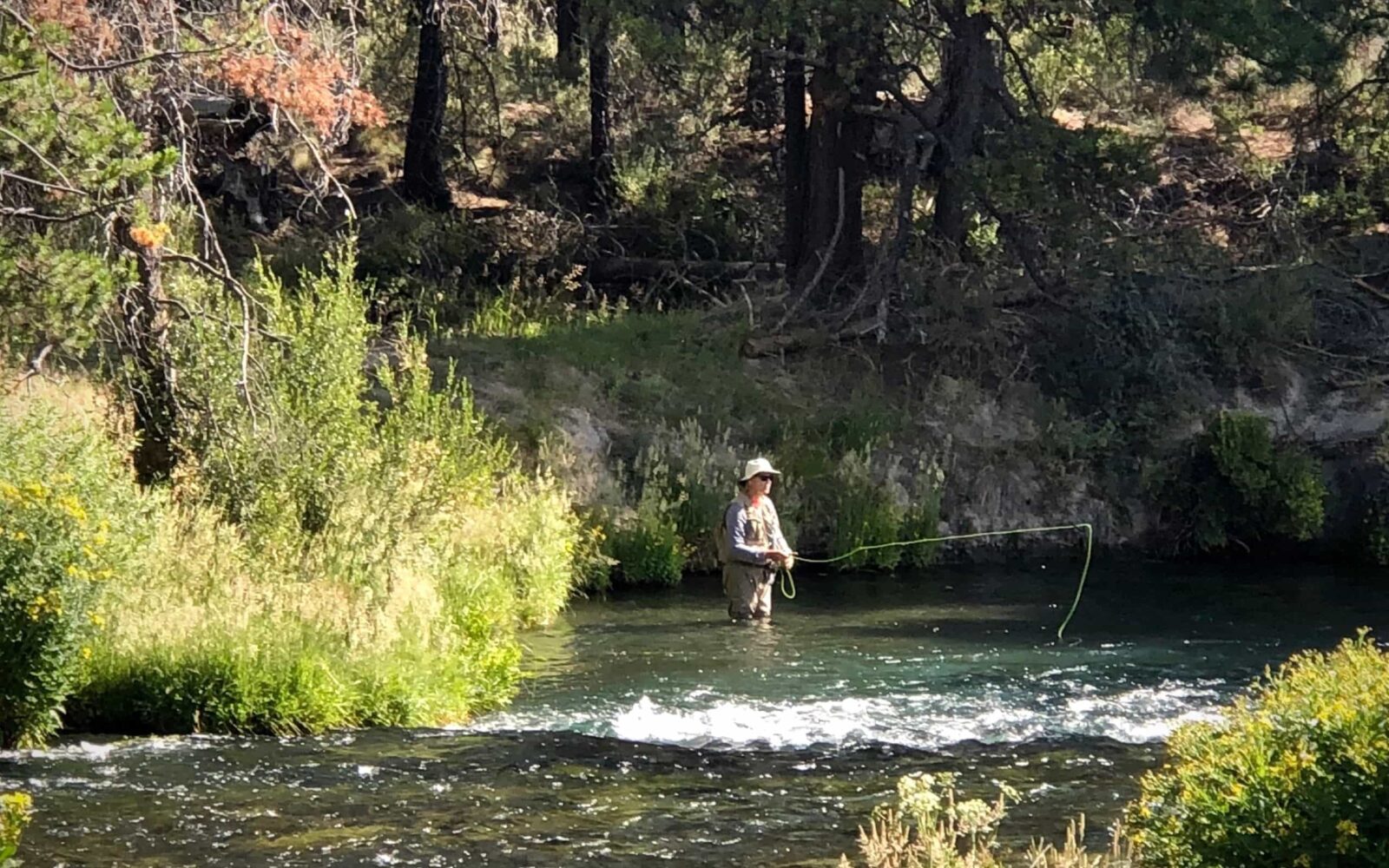 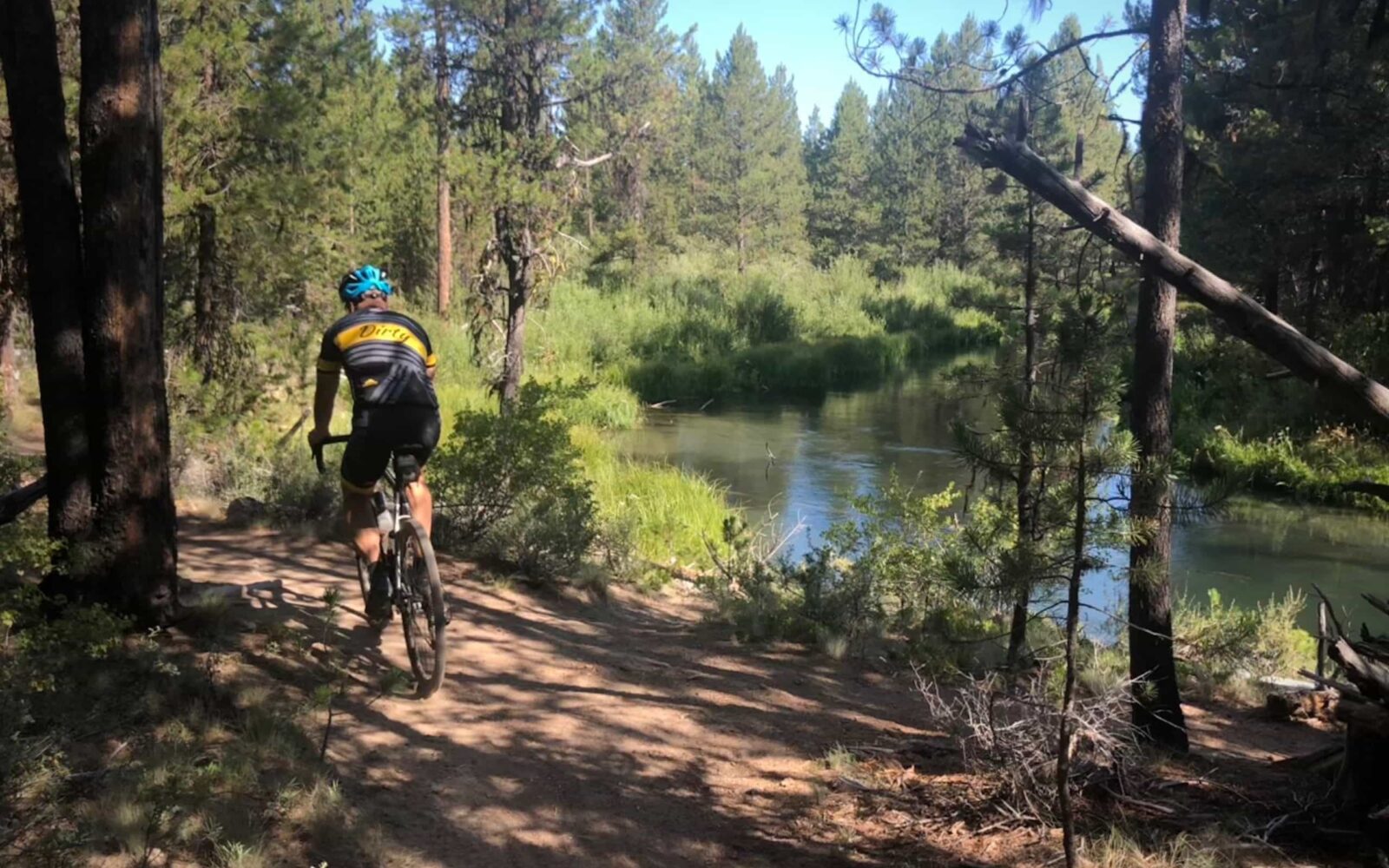 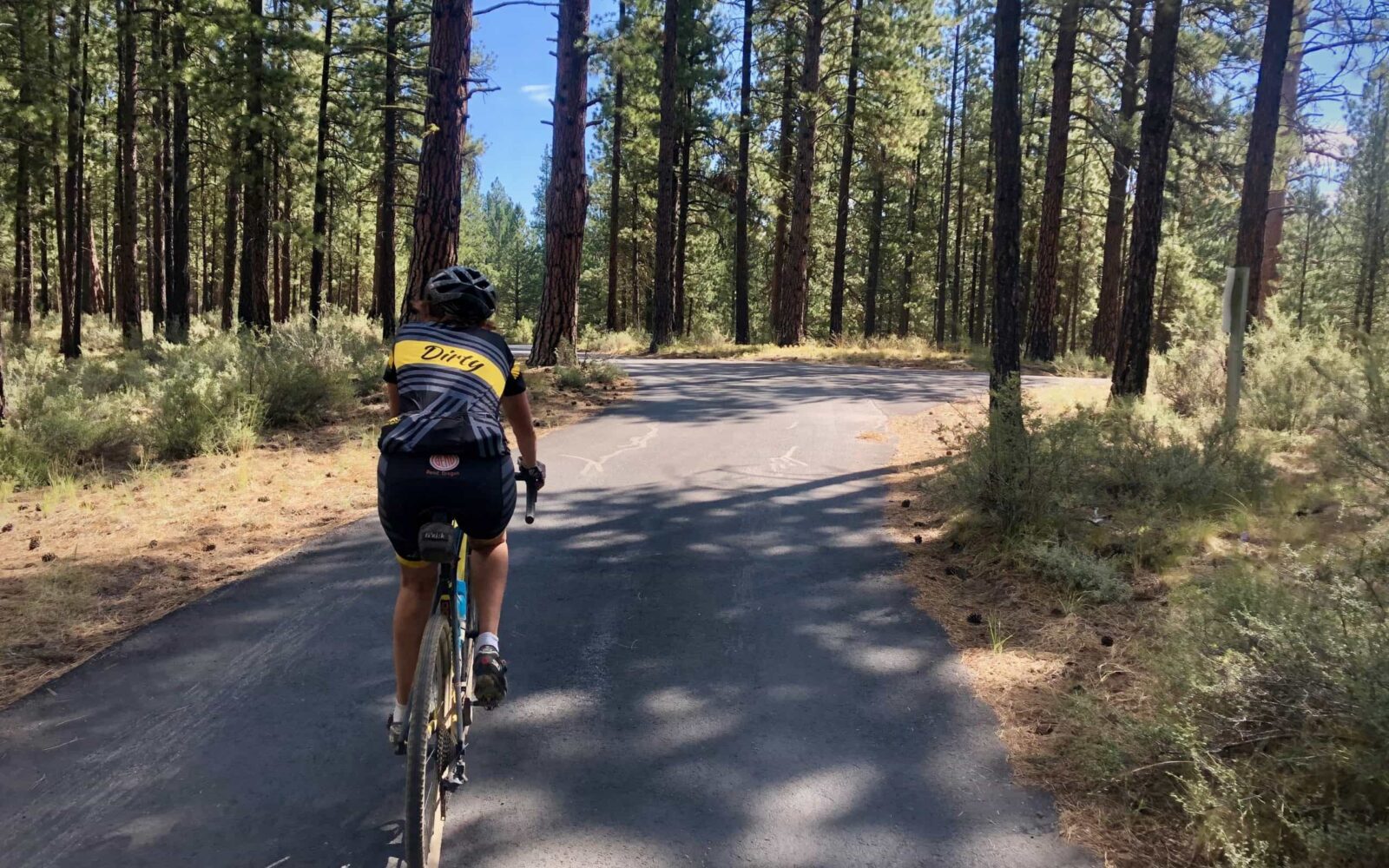 The paved road near the end. 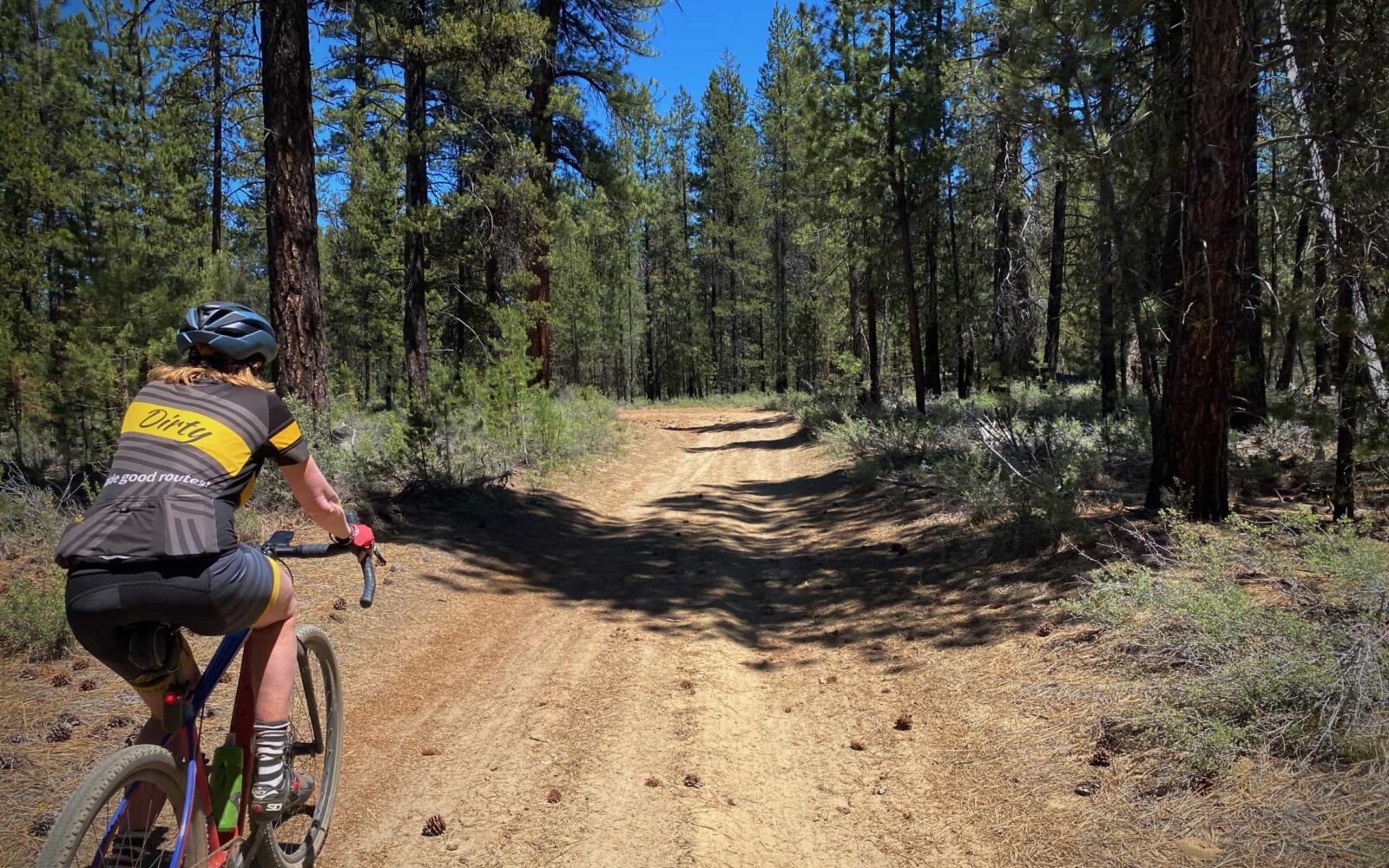 The dirt road around Bates Butte. 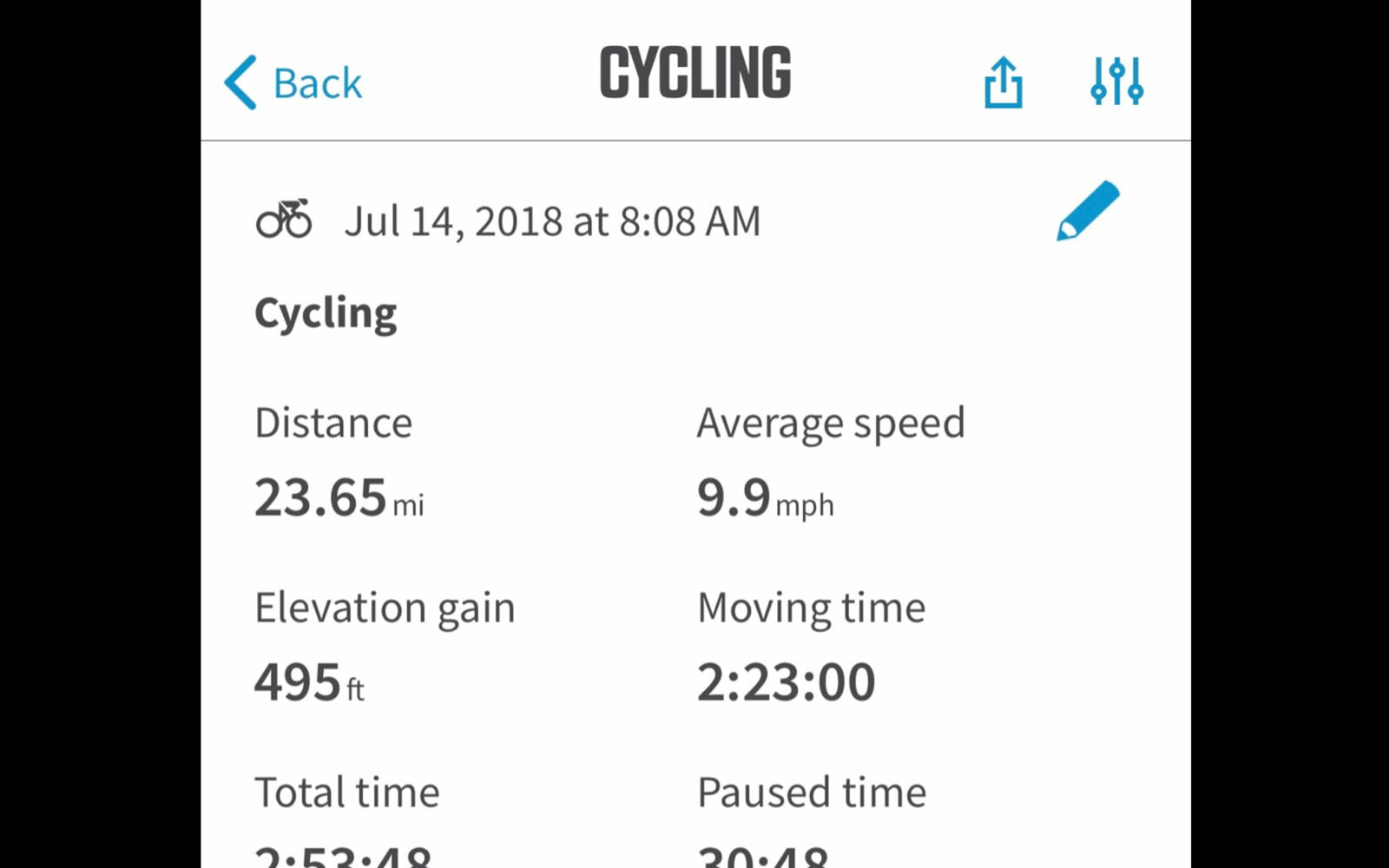 Gravel Girl's ride data. Use average speed as a guide, not distance! She rode a bit extra.

Big Red sounds like the name of a dog … or an old pickup truck … or that kid in high school who played center on the basketball team. But in La Pine State Park, Big Red is the name of Oregon’s largest ponderosa pine tree. He’s an old guy … Over 500 years old, which means he was alive when Christopher Columbus was born … And he earns his name by topping off at 162 feet tall and 28.9 feet around.

Big Red isn’t the only reason to do this ride: There’s also a visit to the lovely Fall River Falls (yes, the name is really Fall River Falls.) And there are miles and miles of gently rolling single track trails along the Deschutes and Fall Rivers in La Pine State Park. Most of the ride is wonderfully shaded and the trails are mainly smooth and packed down.

There’s almost nobody on these trails; just mainly fly fishers who pride themselves on their secret fishing spots and hikers who are camping at the park. But you will see birds of prey: hawks, osprey, and even owls.

This ride is easy like Sunday Morning. But it’s well worth the drive to La Pine just for all the river views … and the visit to Big Red.

Almost anytime from late spring (let the snow melt and allow the ground to dry out) through late fall.

By Kevin English and Linda English of Team Dirty Freehub.

A highly scenic ride (meadows and waterfalls) meandering along the Deschutes River through big Ponderosa trees on a mix of wide single-track and double-track. At mile 13.5 you leave the river and begin a traverse around Bates Butte on dirt roads.

Overall, the terrain is mostly flat with a couple of short pitches of uphill and downhill and one small climb up and around Bates Butte near the end of the ride. There is no rocky, technical single-track.

The beginning of the ride is a bit more urban as you pass by some homes, but that soon fades as you enter LaPine State Park.

We love this ride for its highly scenic payback and for how close it is to town. 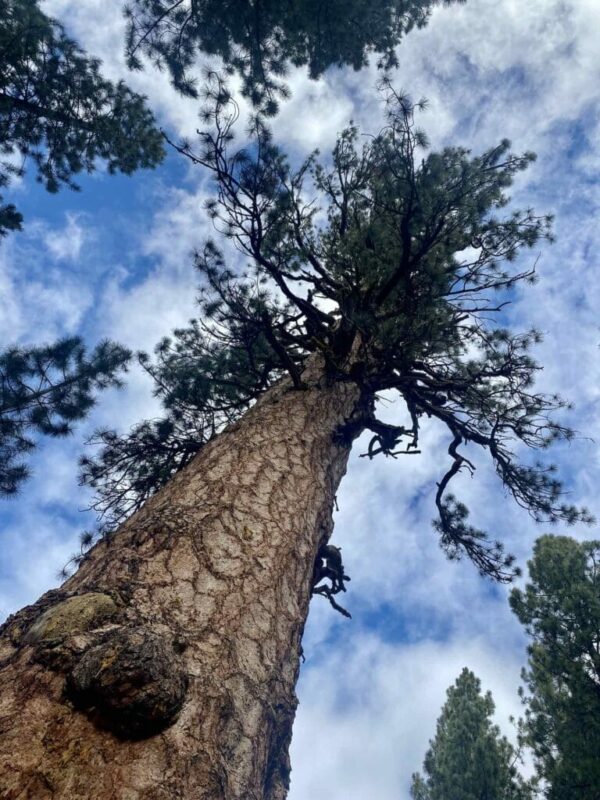 Big Red claims the crown as the biggest and perhaps the oldest of its kind ponderosa in the U.S. It’s been around longer than white settlement in North America. Tree experts have calculated its age at over 500 years and perhaps as much as 600 years old, sprouting from the seeds of a cone around the years of 1400-1500 AD.” [The Source]

This was an arching bend in the river, but at some time, the river forged a new, straighter channel bypassing the bend. Thus, the slough. 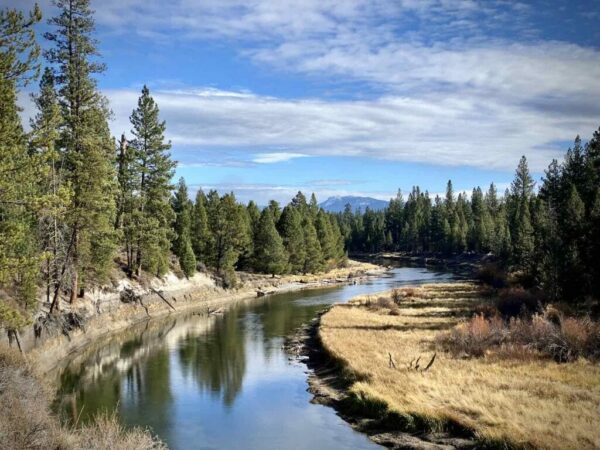 One of the best views of the Deschutes River in the park. The viewpoint is at a tight bend in the river and is named for Don McGregor who was a member of the State Parks and Recreation Advisory Committee in the 1960s and ‘70s. [The Oregonian]

“A small, but lovely waterfall at the north end of the park cascading down a 14-foot step.” [The Oregonian]

A shorter version of this route, what we like to call the Family Friendly version, can be had by parking at the Big Red trailhead (Lat / Long: 43.769755, -121.518360) and doing an Out & Back to Fall River Falls. From the parking lot, go directly north and pick up the route at mile 6.5. Fall River Falls is at mile 13.2, making for a round trip of 13.4 miles. To get to the Big Red trailhead, take State Recreation road west from Highway 97 for 4.3 miles and turn right on Bench Leg Road. Go 0.7 miles to the parking area / trailhead.

A longer version of this ride is Big Big Red. It is a Training Route versus a 5 Star Route, meaning that it lacks exceptional quality throughout the entire ride. But … it still is a very fun ride!

Single-track trails like you will find on this route are built and maintained by local tails organizations like the Central Oregon Tails Alliance. We encourage you to learn more about their work and to advocate, volunteer or donate with them or your local trails organization.

Single-Track Trail Etiquette (Who has the right of way?)

Ever wonder who has right of way on those single-track trails? Downhill rider? Uphill rider? The runner? Who? In this episode of The Connection, we speak with Emmy Andrews the Executive Director of the Central Oregon Trails Alliance about trail etiquette.