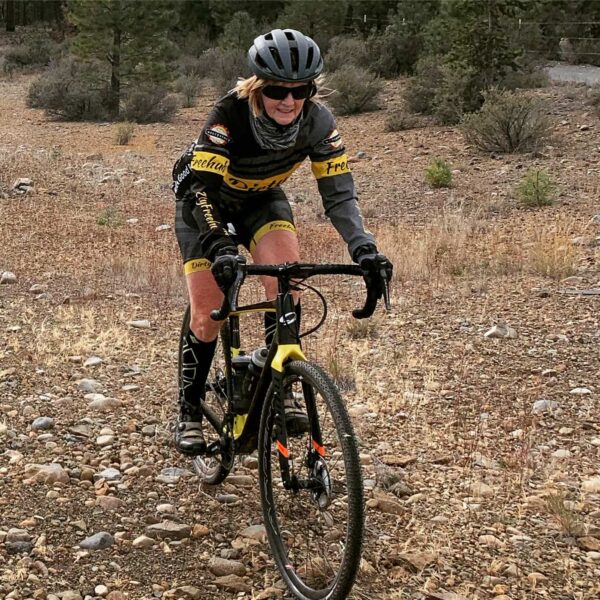 Linda English is the Executive Director and Co-Founder of Dirty Freehub. She is also the head of a local bike group, BACE, with over 3,000 members and is a founding member of a Bend, Oregon think tank, Looking Forward.

Linda was the founder of the non-profit organization LINGOs — Learning for International NGOs — which provides online learning to 70+ international nonprofits around the world including Save the Children, World Vision, The Nature Conservancy, and Habitat for Humanity.  (LINGOs is now Humentum.)

Linda has served on the Board of Directors of Family Kitchen (soup kitchen) and on an advisory board for Guardian Group (anti-trafficking of young women). She also worked at Save the Children as an eLearning Manager.  And she founded Net Ingredients, a web marketing consulting business.

In her early career, Linda worked at Microsoft in a variety of international marketing positions, including channel marketing at European HQ where she managed 4% of Microsoft’s revenue for the region. At age 35, she left Microsoft to start her career in philanthropy. She has a Master’s Degree in Instructional Technology from Syracuse University with an emphasis in artificial intelligence.

Linda switched from road to gravel cycling in 2013 when she realized she couldn’t make it as a mountain biker, but she might be able to ride gravel roads.

Her gravel bike is a Niner RLT RDO on tubeless tires (Maxxis Rambler 40 mm, HED Ardennes aluminum wheels) for when the route has a lot of pavement and smoother roads. But for all gravel, exploration or single track, she rides a Salsa Cutthroat, also tubeless. (“Friends don’t let friends ride tubes.”) Her Cutthroat has DT 240 hubs, NOX Carbon rims, and big fat 50 mm tires with a Shimano GRX drivetrain.. She loves CushCore inserts to take out the chatter and she can ride out on a flat (which given we run into goat heads is important!)

Linda also loves to write about cycling. She has written Tasmania the Next Gravel Capital? and Secrets to Finding Gravel Routes for Gravel Cyclist and Adventures of Gravel Girl for Cycle Oregon Newsletter. And she wrote Top Ten Rides in Central Oregon, Bucket List of Oregon Gravel Rides, Gravel Cyclist and Basecamp: Maupin/Dufur,  Help! How to Help Yourself Before You Crash on a Bike, and Secrets to Winter Riding in the The Source. And she wrote Borderline: Graveling Along the Border in Arizona for Gravel Cyclist. Also she wrote Taking the Plunge Into Gravel e-Biking in The Source and Gravel Girl’s Key To Winter Cycling.

She also helped with Four New Gravel Routes to Ride in Bend Living Magazine, Local Cyclists Share Their Love of Cycling in Bend Bulletin, and Photo Feature: The Gravel Roads of Oregon for Gravel Cyclist. And she helped with A Furry Ride: Alpaca Route in The Source, Bend Cyclists Say Gravel Routes Good for Social Distancing on KTZV, and Gravel Riding: A Good Option During the Pandemic in the Bend Bulletin. Also, she contributed to Gravel Bike Rides To Beat the Heat in the Bend Bulletin. And with Gravel Cycling Takes People Around the County in the Wallowa Chieftan News and Getting Into Gravel in the Baker City Observer. And finally, What Is Gravel Cycling by the Washington Post and Gravel Girl’s Guide to Cycling in Central Oregon .