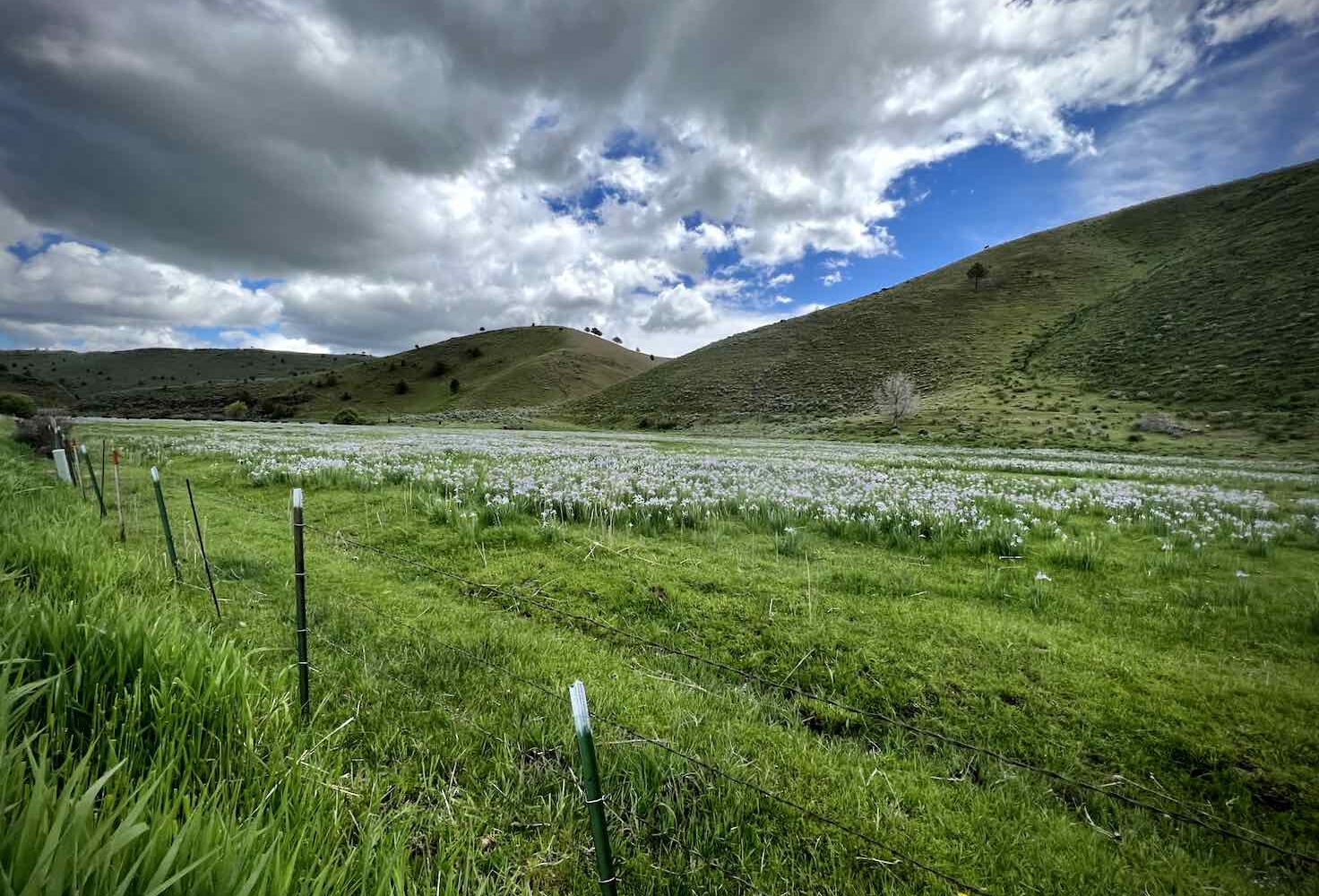 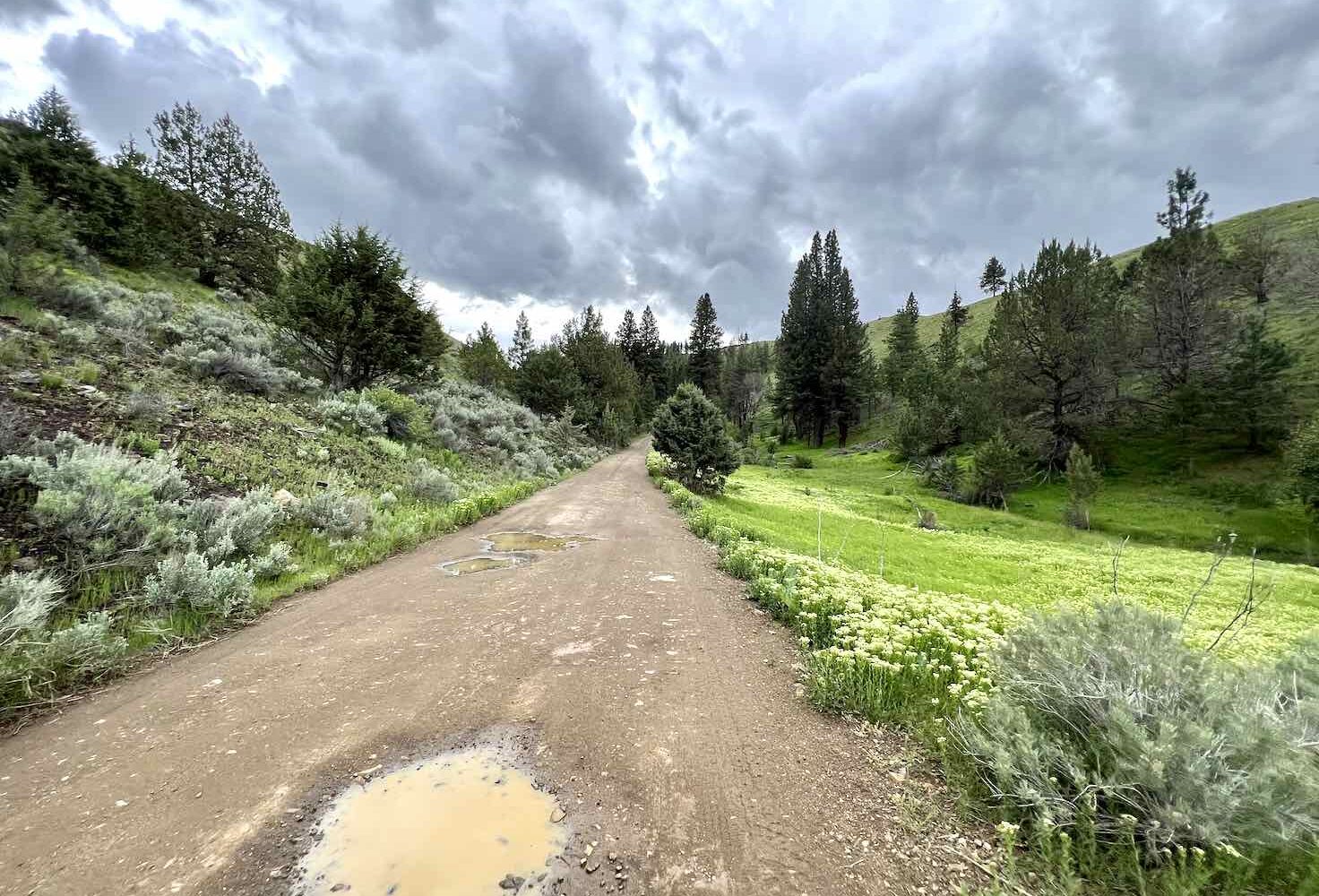 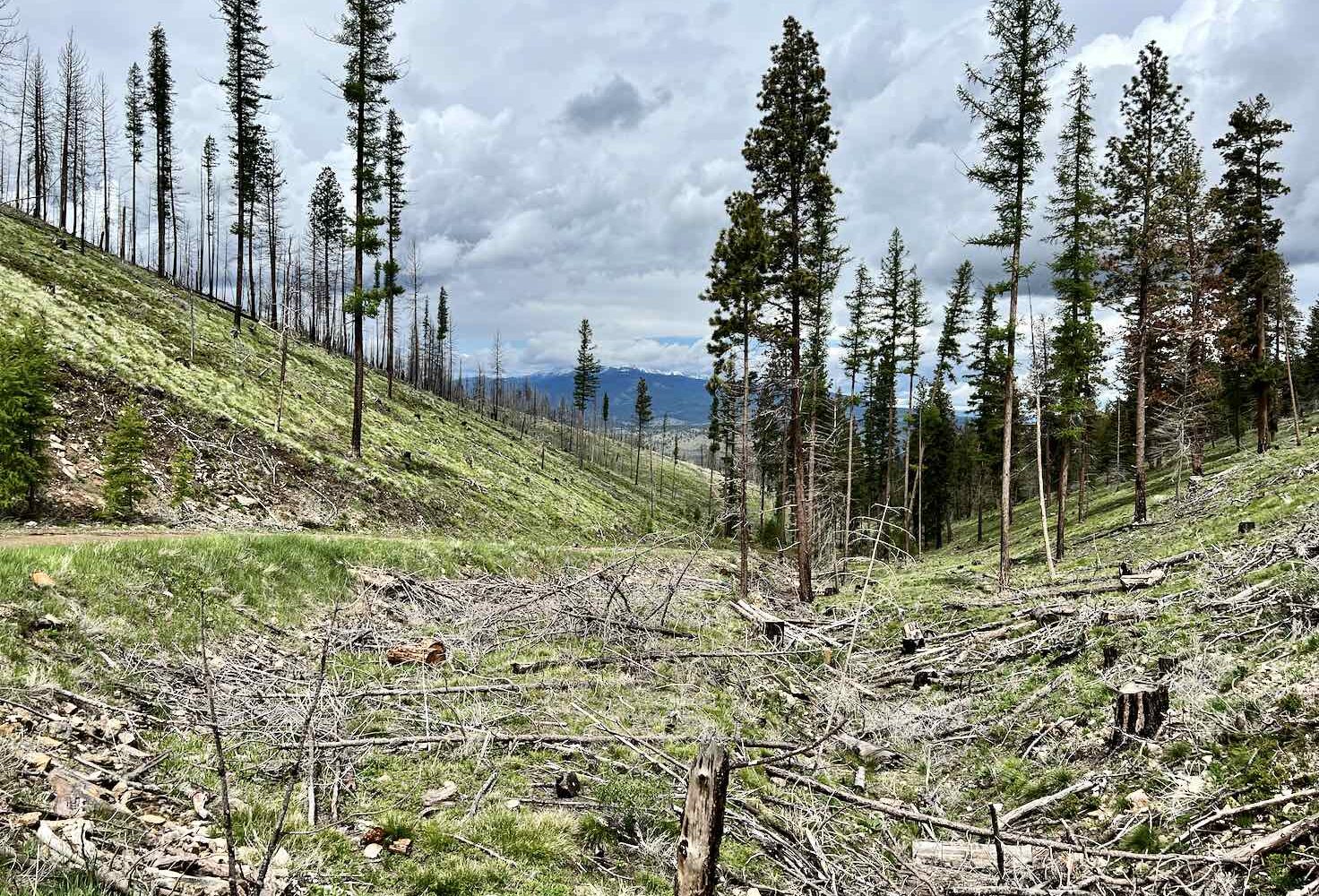 Looking back down Trail Creek road towards the Elkhorn Mountains. 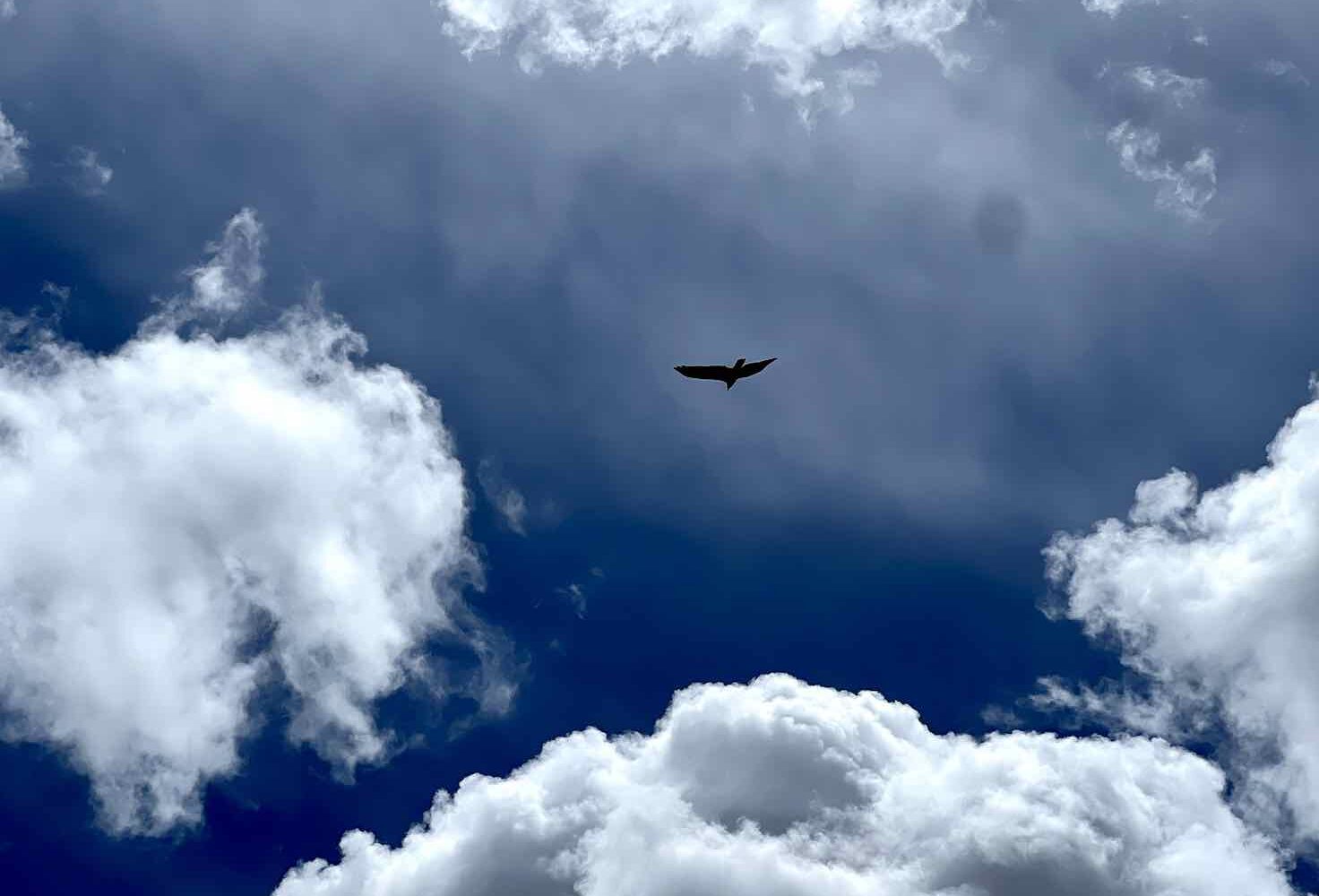 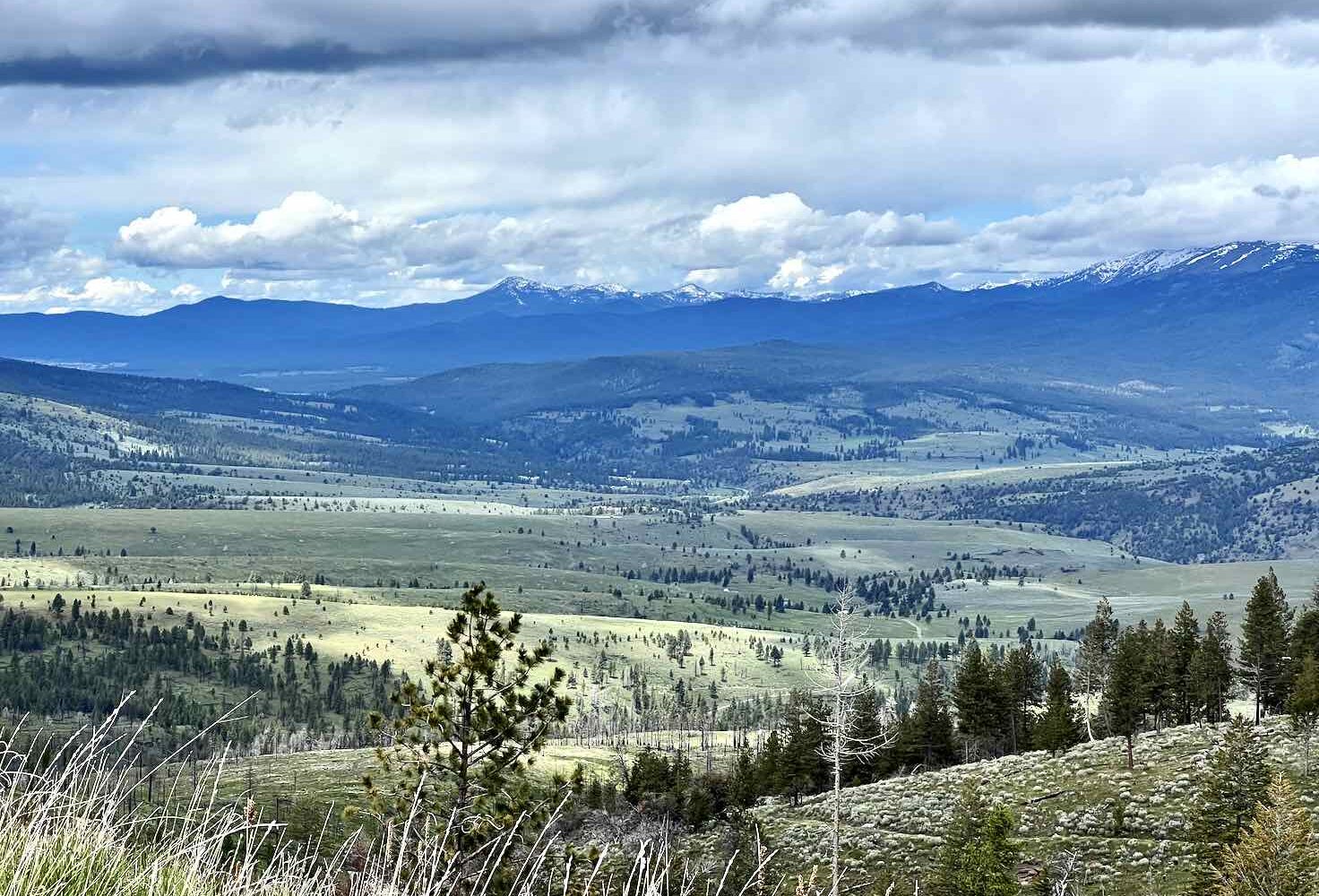 The Elkhorn Mountains in the distance. 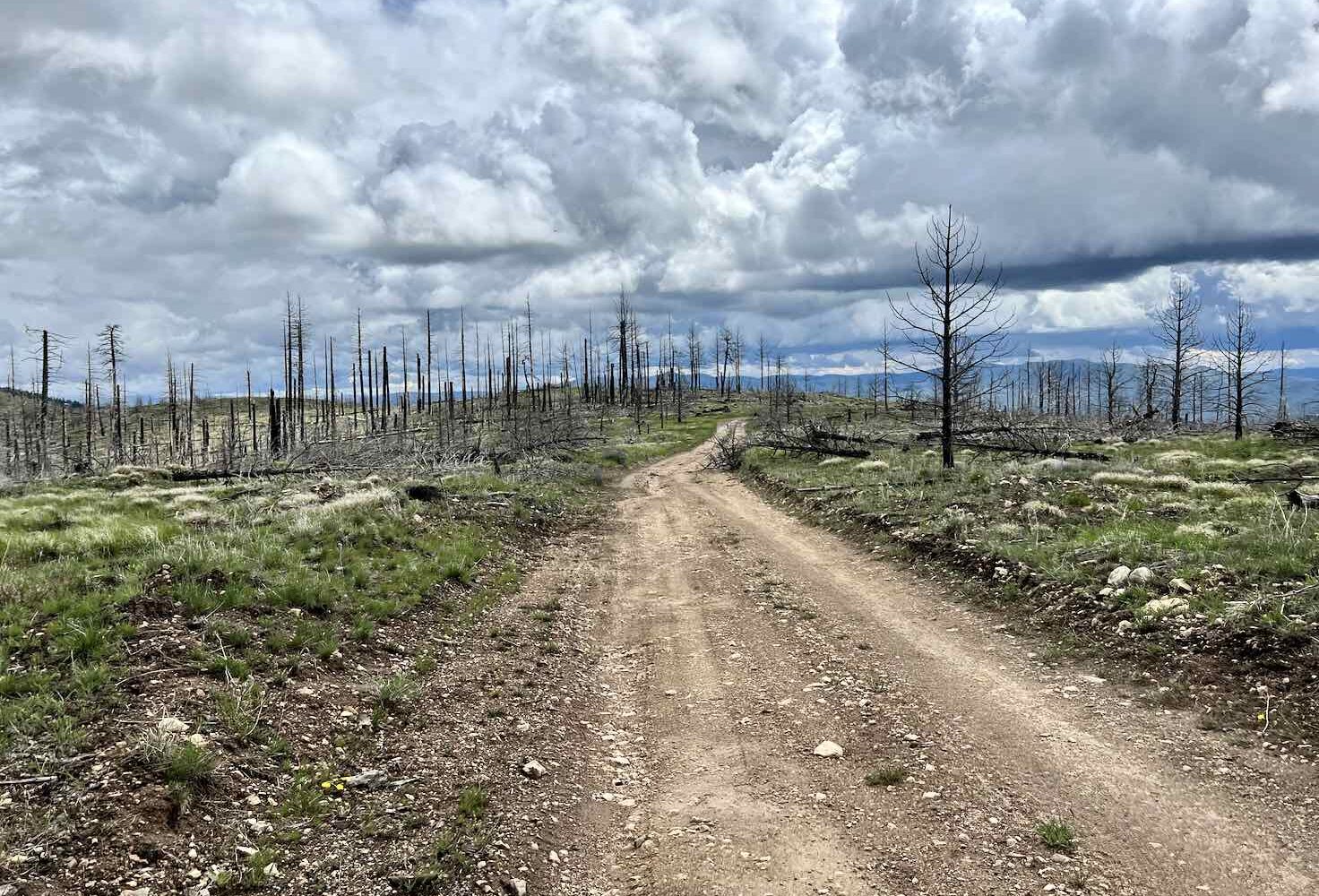 The summit and the remnants of the burns. 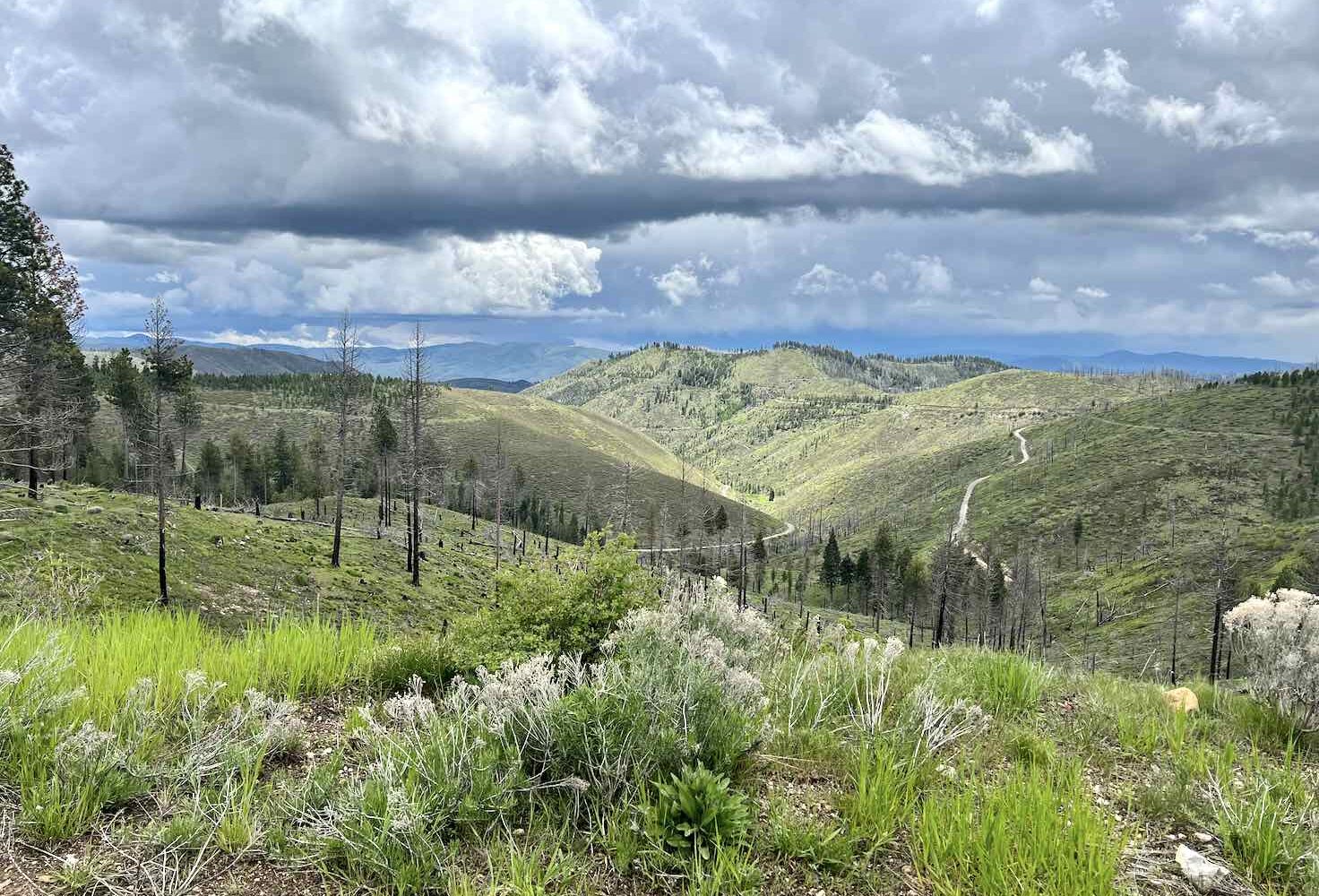 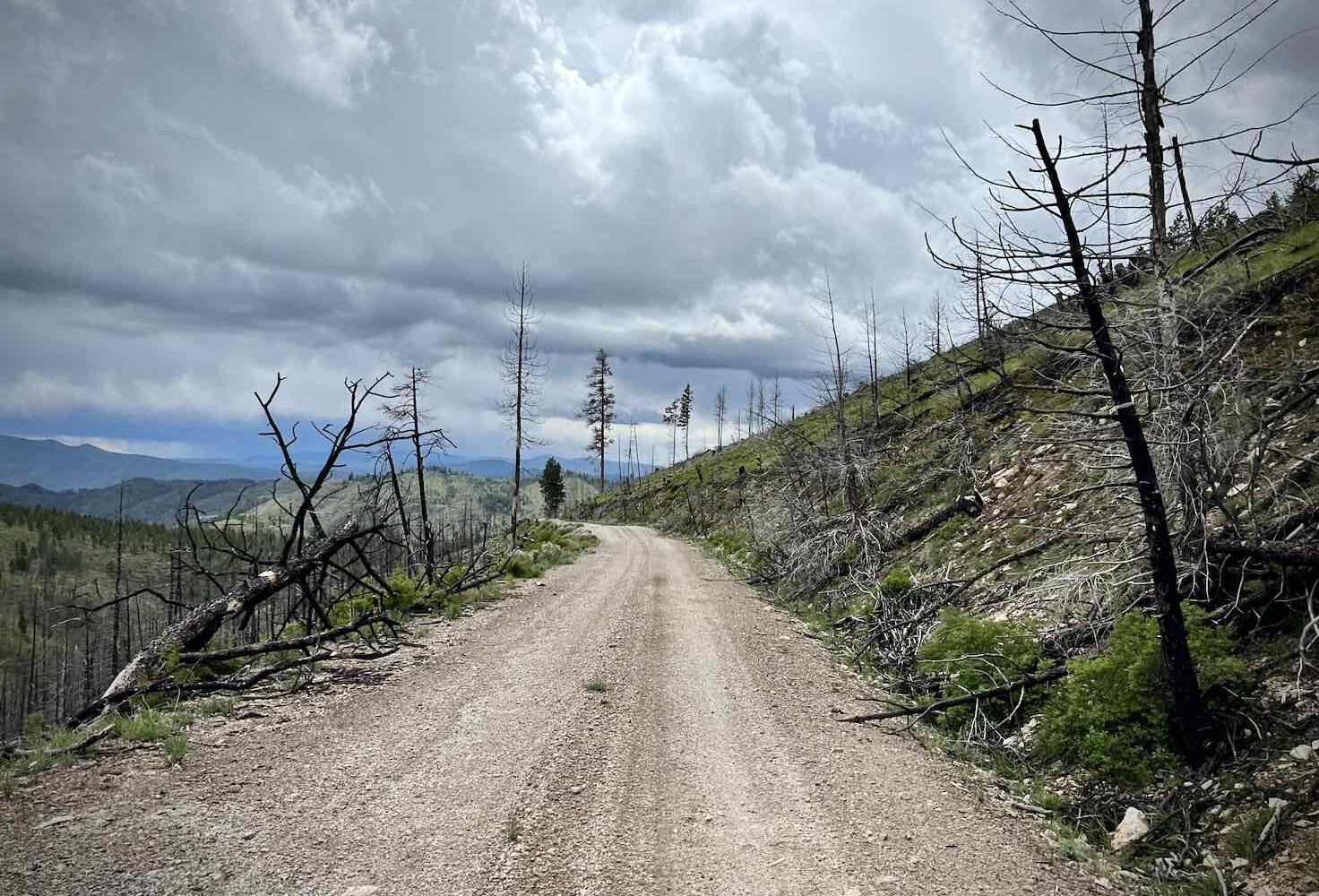 Transiting east to west on the ridge towards Dooley Mtn Road. 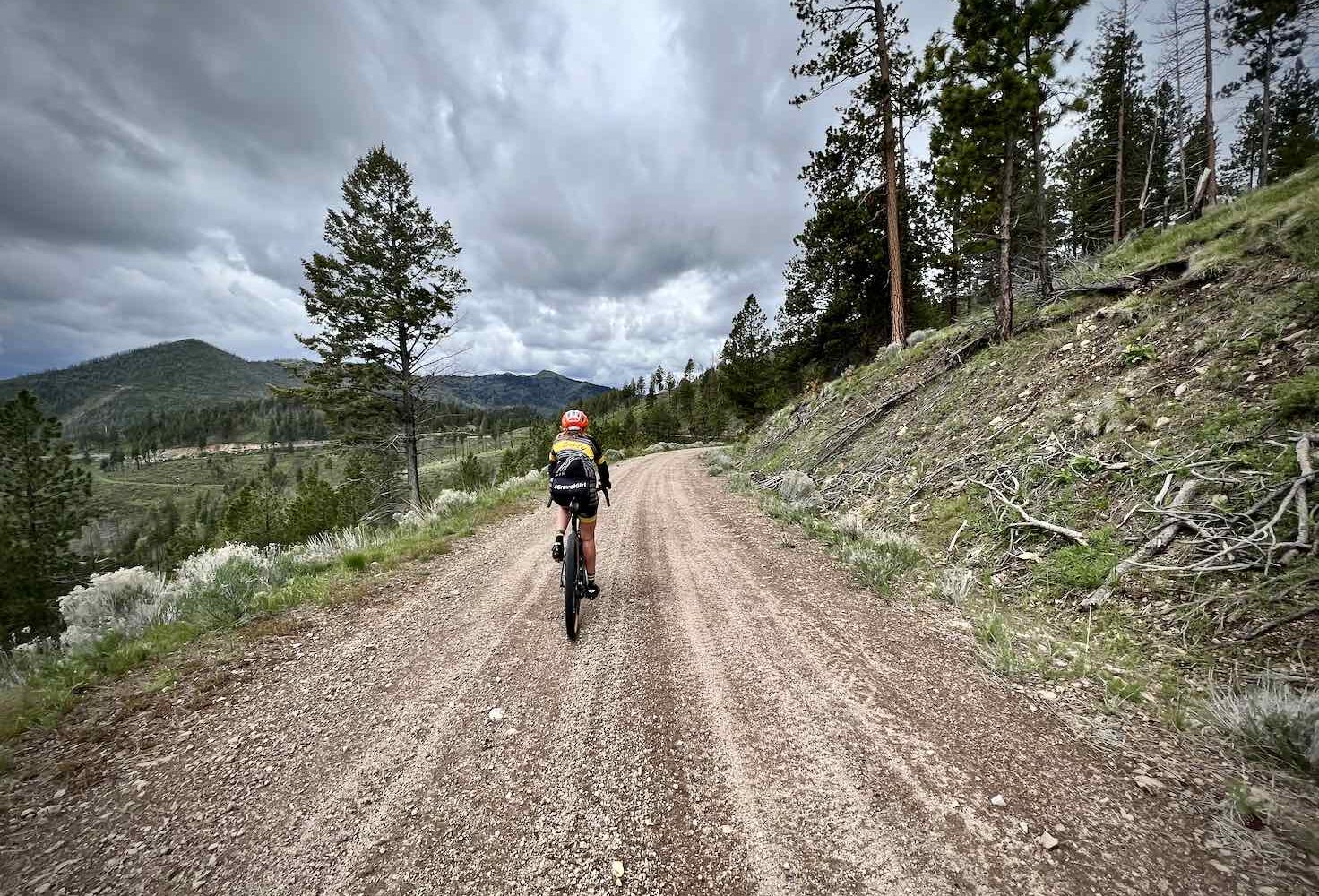 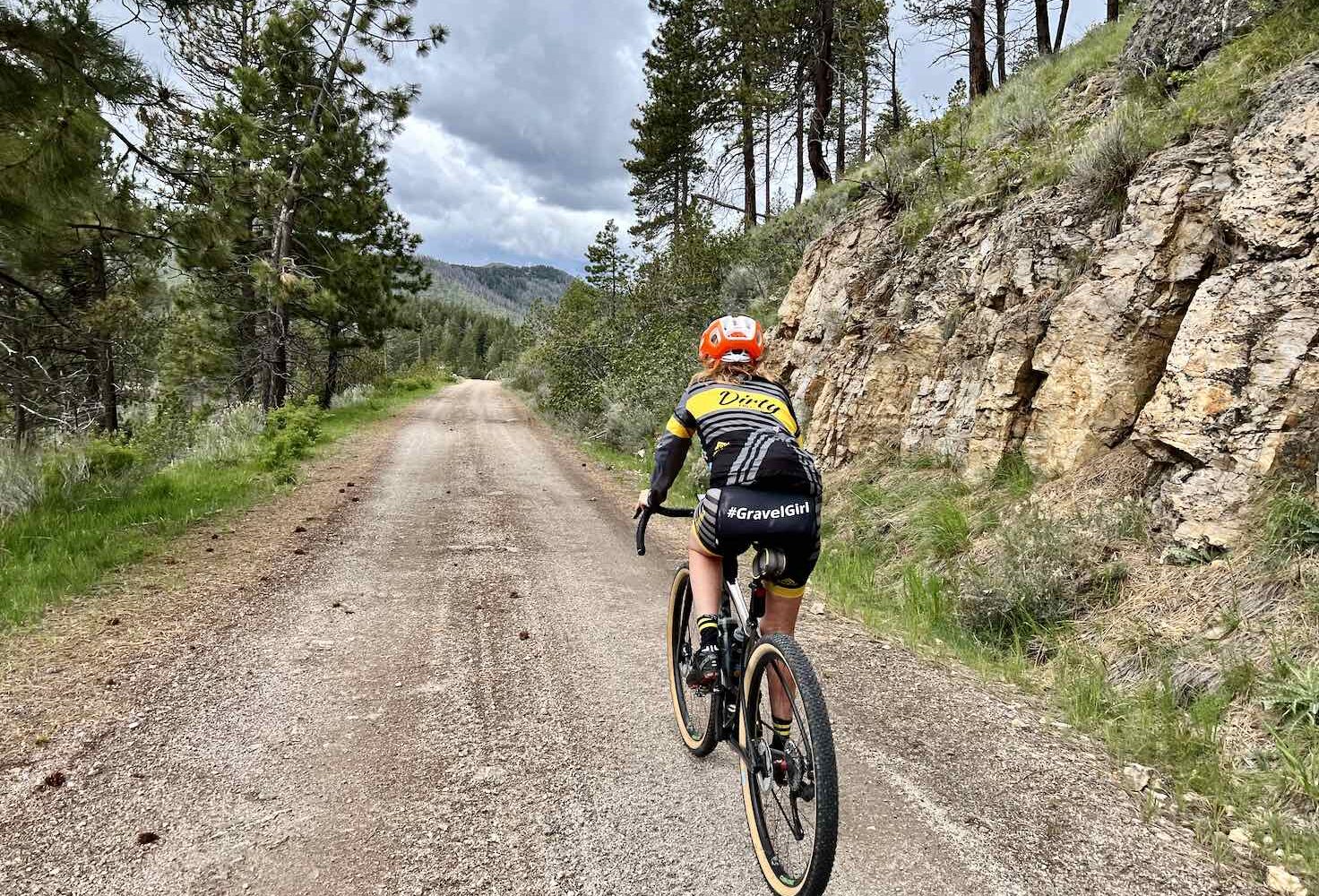 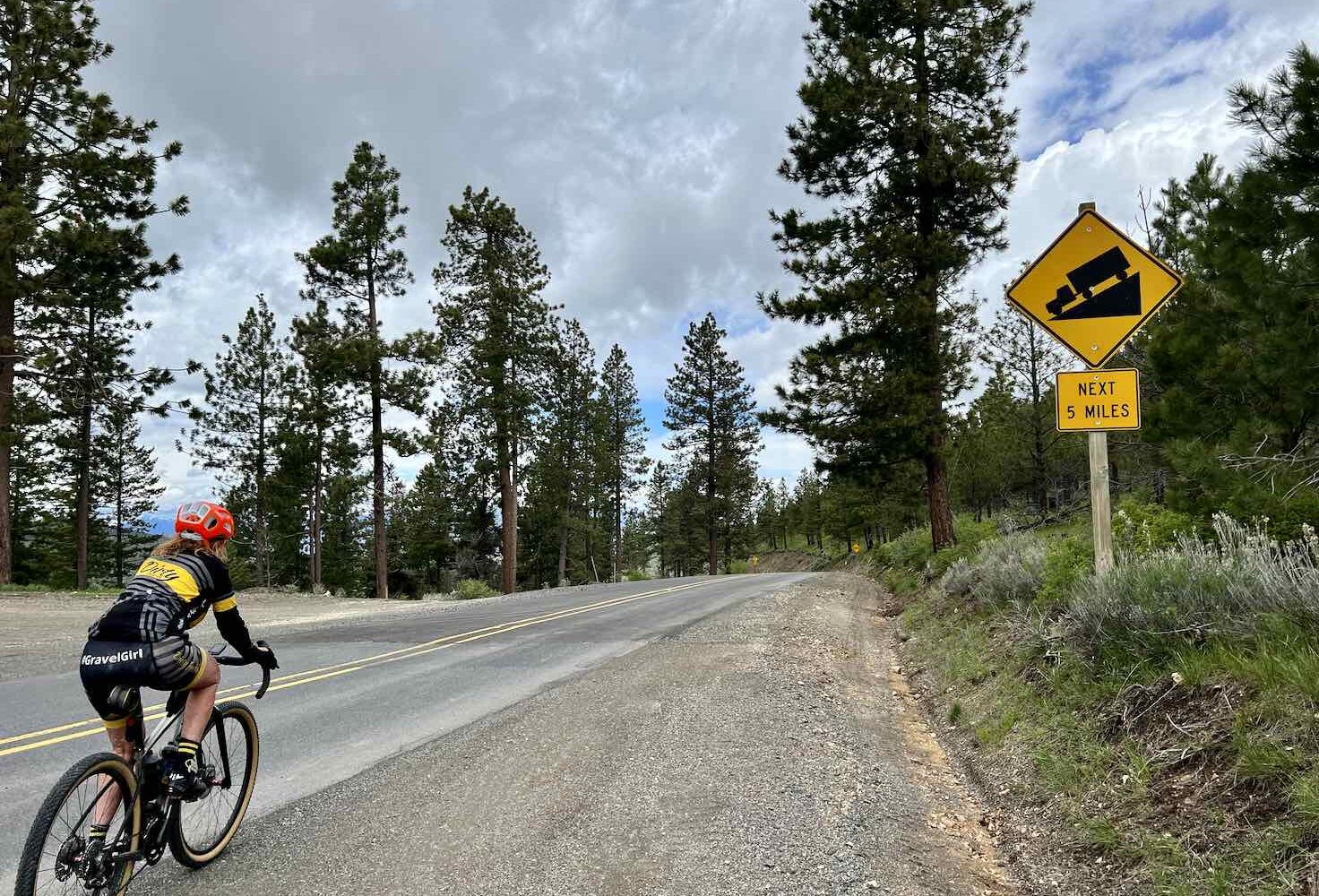 The beginning of the descent! 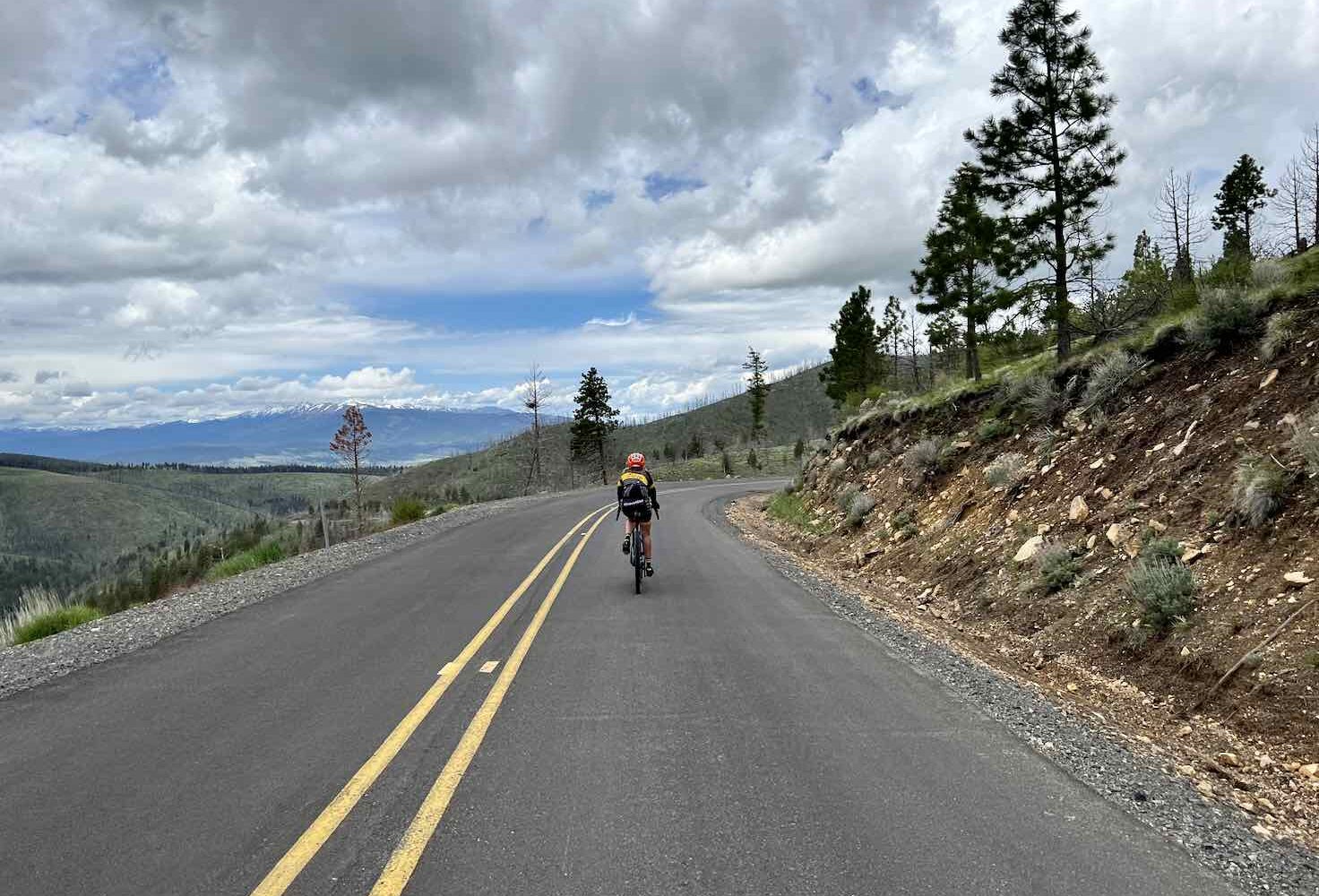 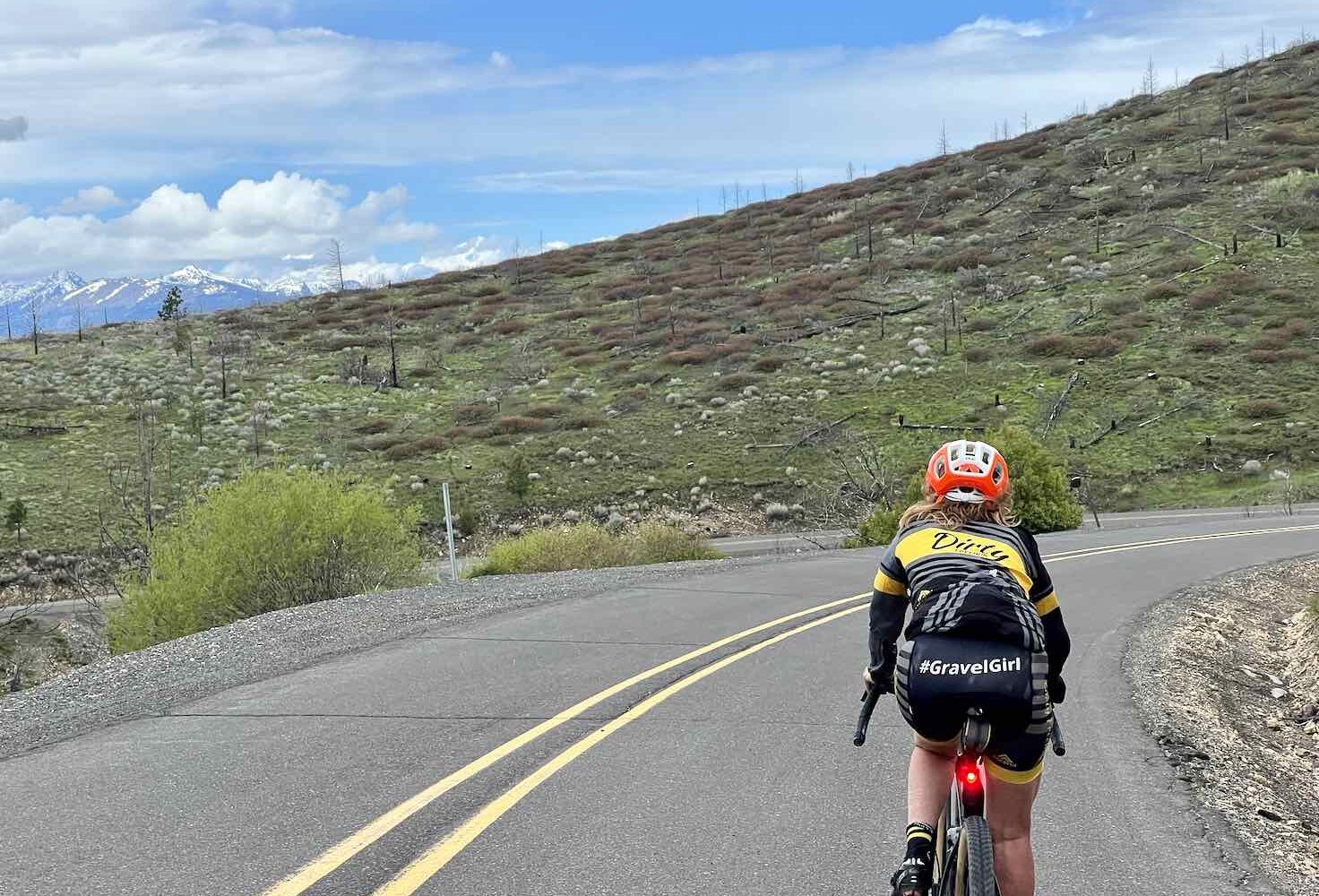 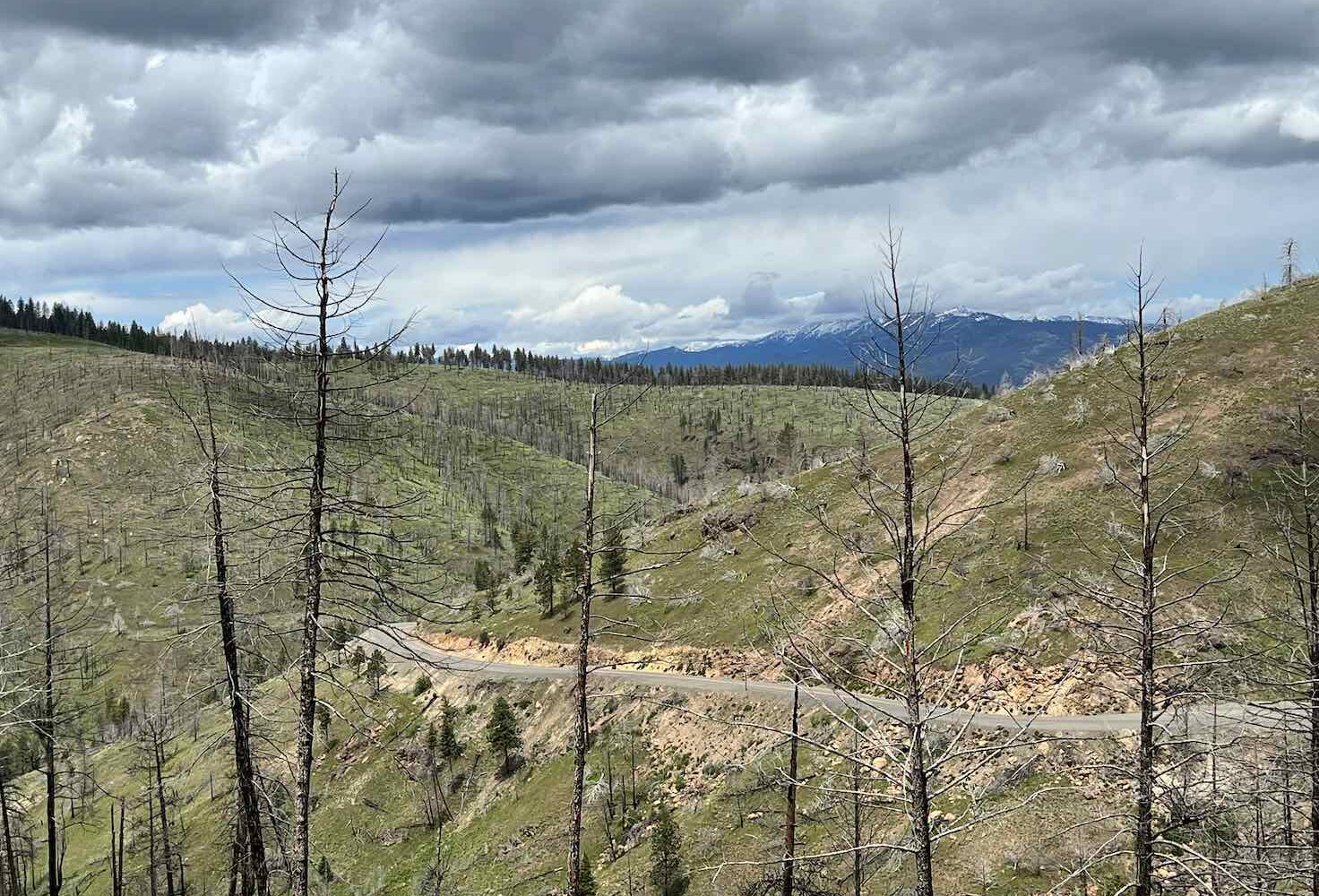 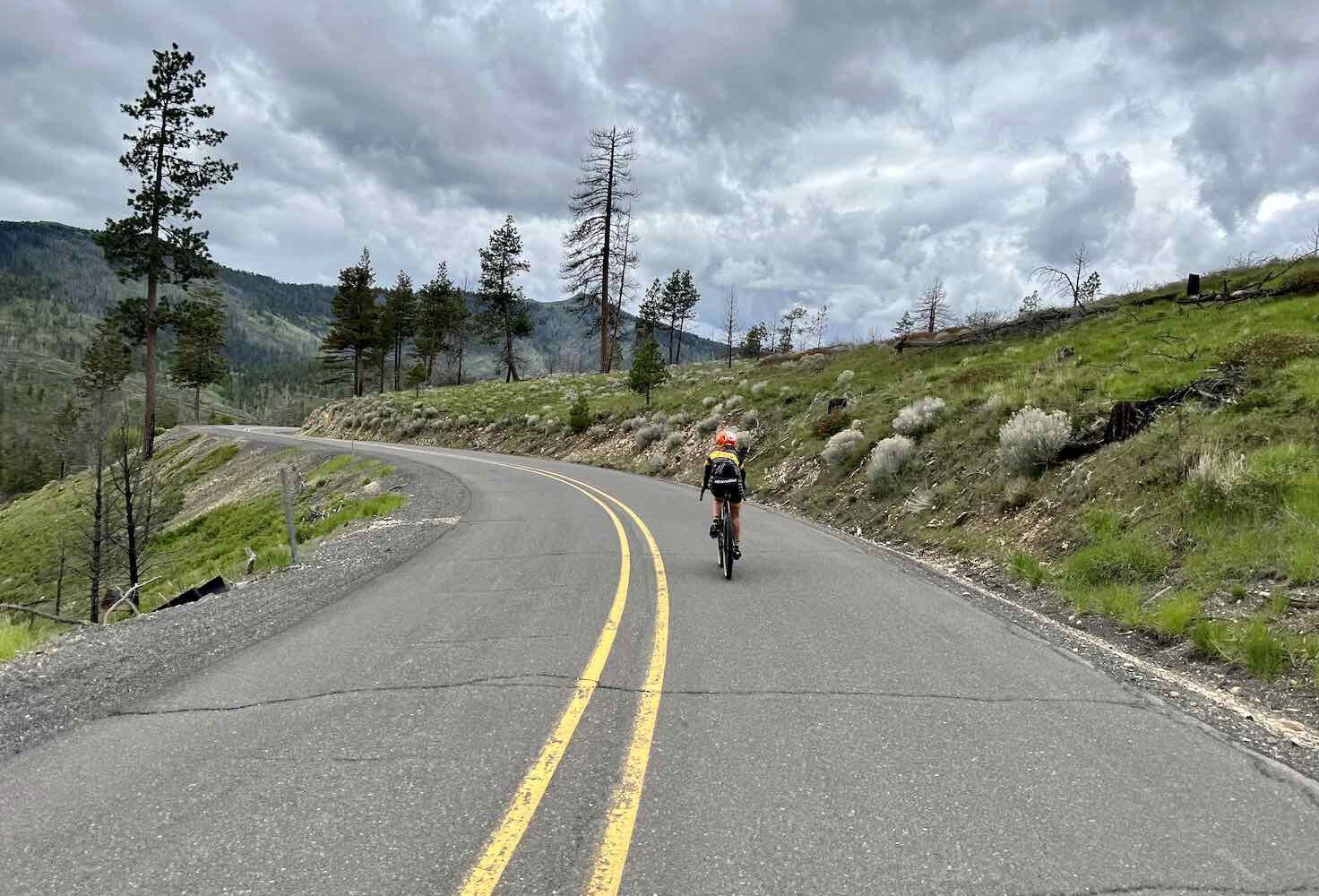 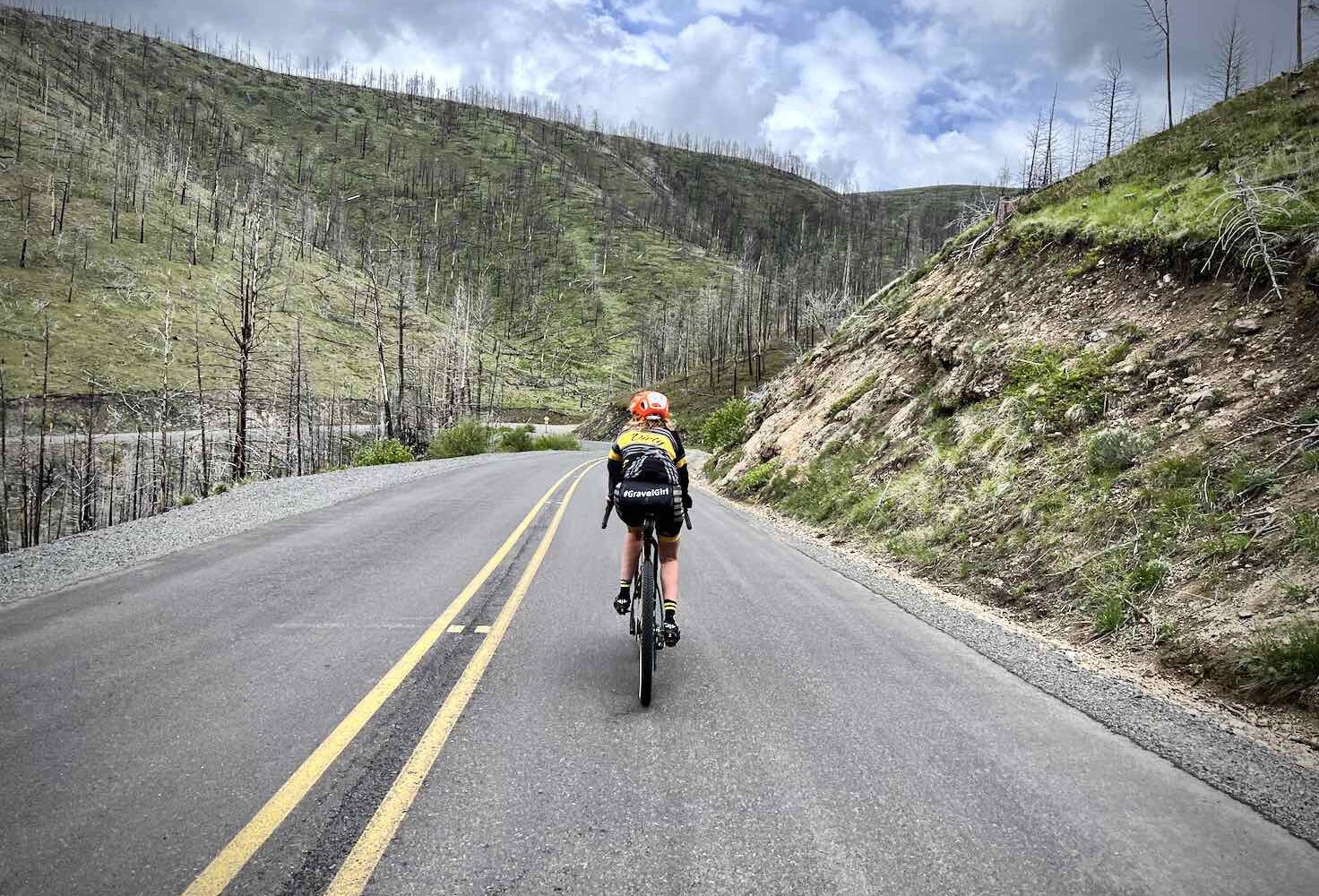 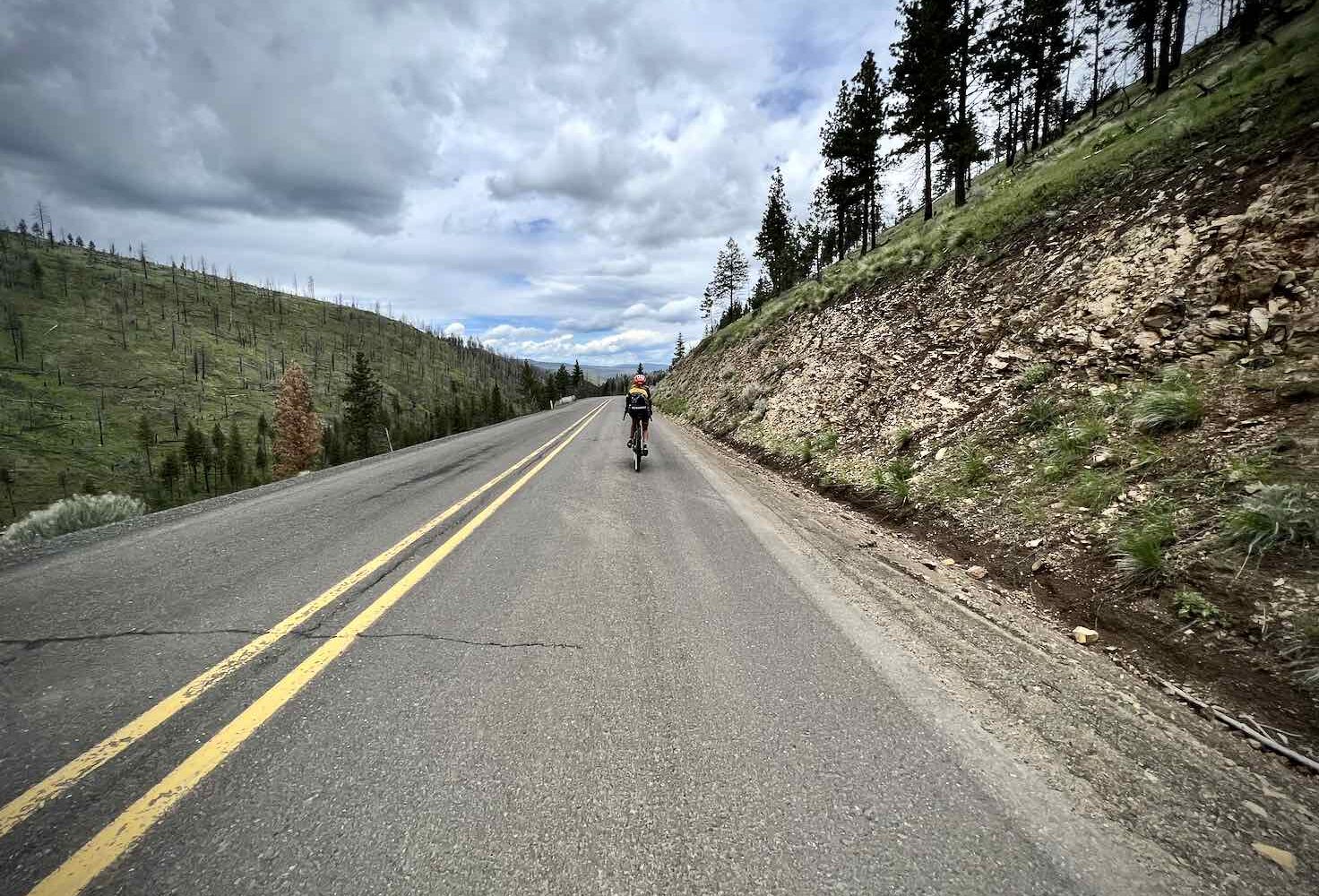 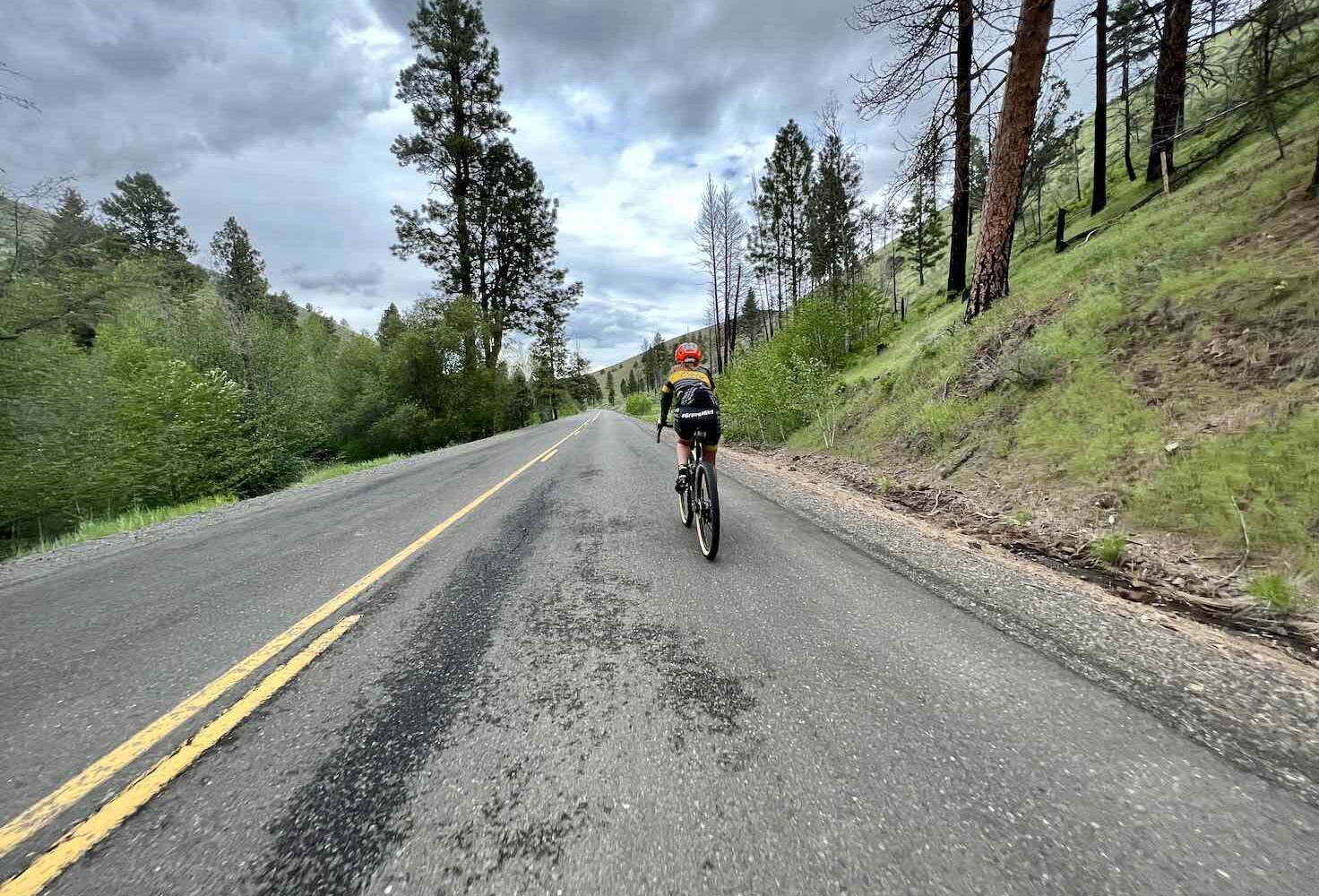 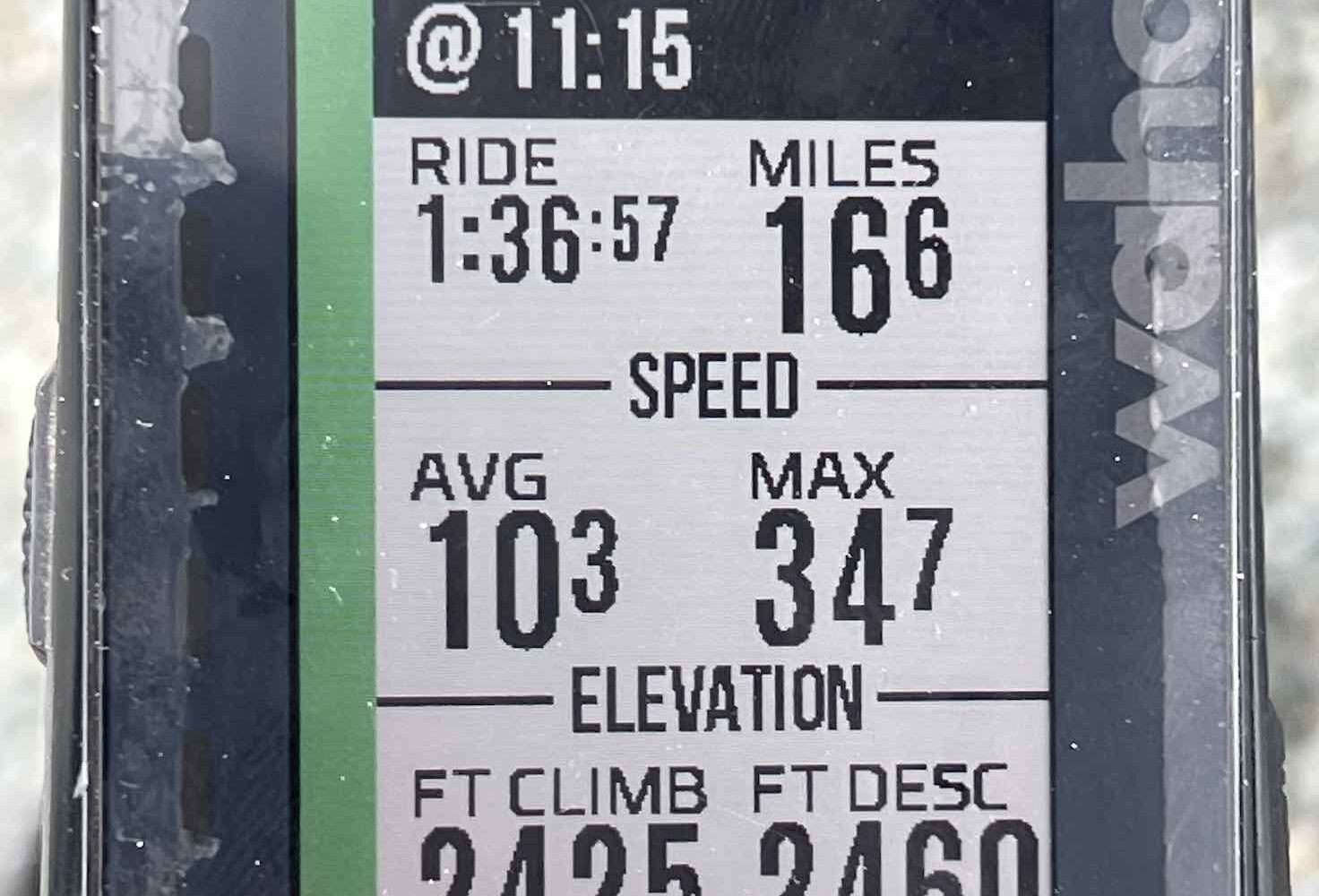 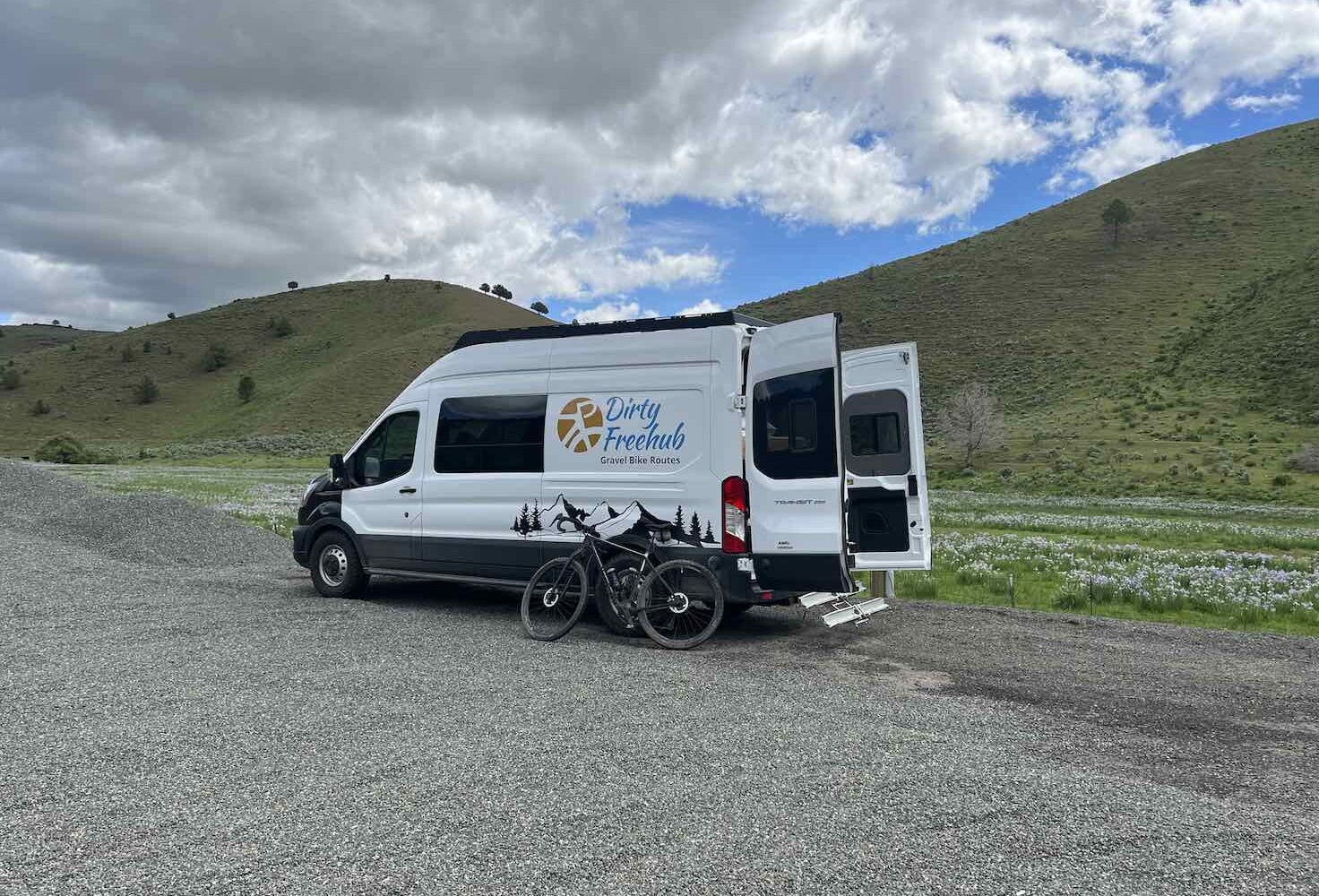 Follow the same route up and over Dooley Summit that miners of the late 1800s took to transit between the gold mining towns of Auburn and Clarksville. It’s not an easy adventure, climbing 2300 feet in ~ 5.5 miles, for an average gradient of just over 8%. The reward for your effort is wide open mountain views and a fast (almost) no brake descent on the current Dooley Mountain road.

So, if you’re looking for a route close to Baker that is short and quick and that will challenge your climbing skills, this is it!

Late spring for the green and flowing creeks. Fall for the change in colors. But … we wouldn’t hesitate to do this ride in the summer.

ODOT gravel pit pull-out on the south side of the road at the intersection of Highway 7 and Highway 245.

A mix of single-lane dirt roads and quiet paved highway. The dirt road is rugged, chunky and steep but rideable. Not super gnarly, but some skill and power are required. Expect continuous gradients of 8 to 12% for the first 1700 feet of climbing; it then tapers off to ~8%. The paved road is downhill at grades of 4 to 6% which is super fun to ride.

Most of the riding is through burnt-out forest lands with pockets of standing green trees. The hillsides are starting to regrow with small sapling trees (circa 2022), but it is mostly tall grasses. Something we find beauty in. The views are wide-open and big. The Elkhorn Mountains to the north, the Burnt River Mountains to the south and in the distance to the northeast, the Wallowa Mountains, the “alps of Oregon”. 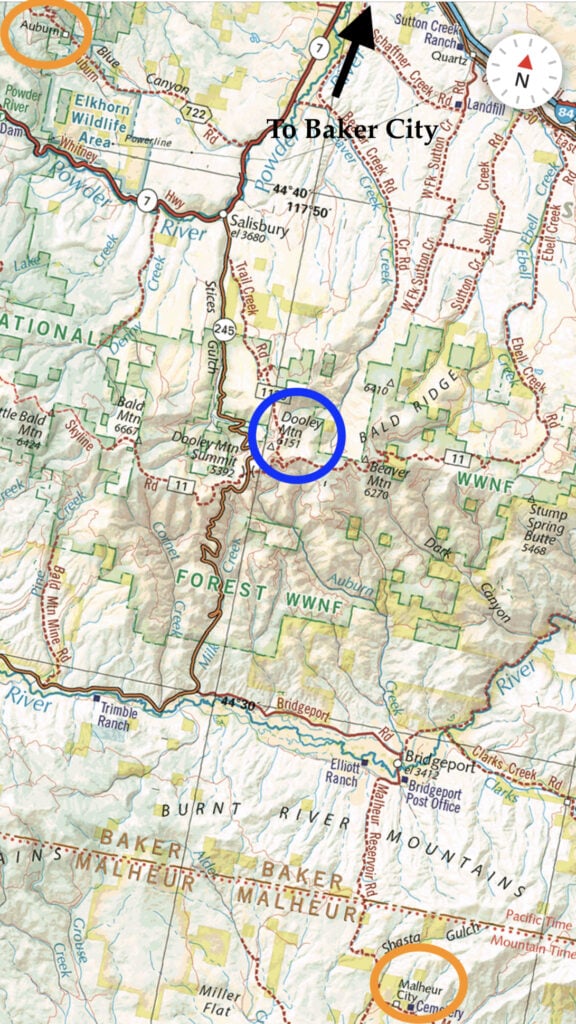 The earliest version of Dooley Mtn Road appears to have followed Trail Creek and passed east of Dooley Mtn. The road was used by gold miners in the late 1800s to transit between the towns of Auburn / Baker City and the mines to the south at Clarksville and Malheur City.

Auburn was a gold-mining boomtown that was once the largest community in Eastern Oregon, located about 5 miles to the northeast of the start of the route. In 1861 gold was discovered in the area, and by September 1862, Auburn had grown into a full-fledged town with over 20 stores and 1000 homes to serve the mining industry. [Oregon Geneology, Oregon Department of Transportation] 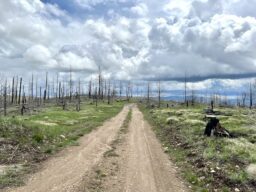 Extensive efforts have been made to restore the area. 2017 marked the beginning of a four-year reforestation campaign that put about 1.4 million seedlings into the soil on about 5,000 acres, including plots both east and west of Highway 245 that burned in 2015. The effort cost close to $2 million.[The Observer] 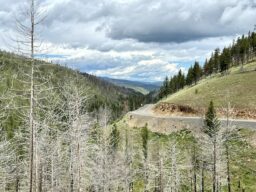 Until the mid-1980s Dooley Mtn road was the major thoroughfare to John Day until the state then constructed Highway 7, a more direct route from Baker city to Sumpter to Bates to John Day. The current day Dooley Mtn Highway is used mostly by local traffic. 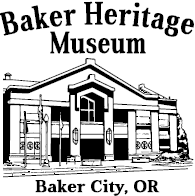 To learn more about the mining and logging history of the Baker area we recommend a visit to the Baker Heritage Museum in downtown Baker City. 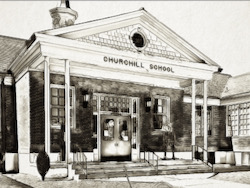 A really cool place to stay in Baker City is the Old Churchill School. They cater to cyclists with a hostel, high-end B&B, art hub and live concert venue.

Ridden and Reviewed by: 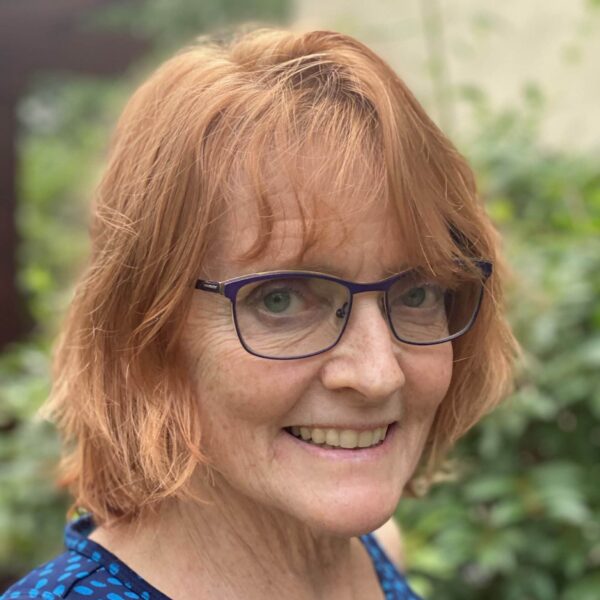 She loves a good day of gravel, like most people like a good book. She’s always amused by the outdoors and the wild adventures. Gravel Girl is a Co-Founder of Dirty Freehub. 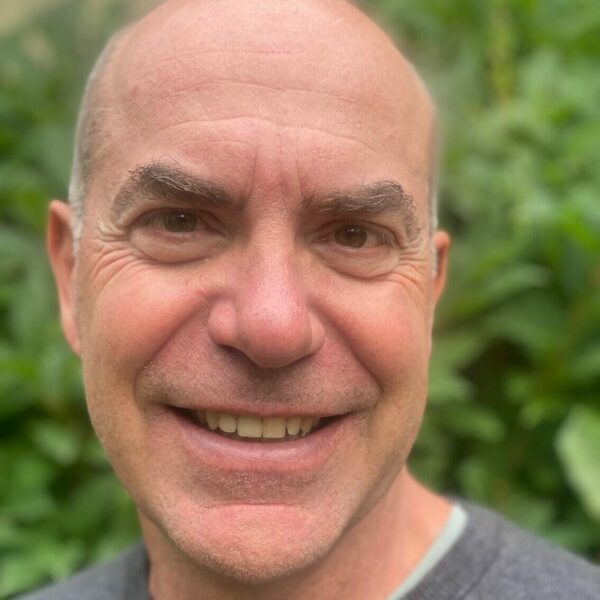 He should have “Never Stop Exploring” tattooed on his chest! He loves adventures on bikes and is a Co-Founder of Dirty Freehub.

We Need Your Support!

Dirty Freehub is a 501(c)3 nonprofit funded by generous donations from riders like you!