5 Star Route / Whitefish, Montana / Published May 2020
Save to Favorites Remove from Favorites 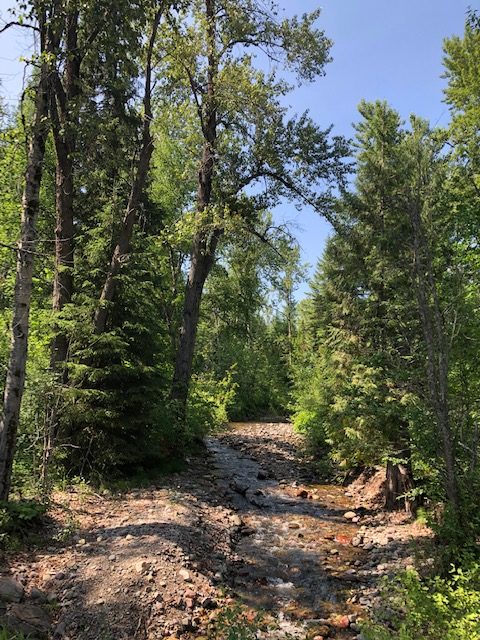 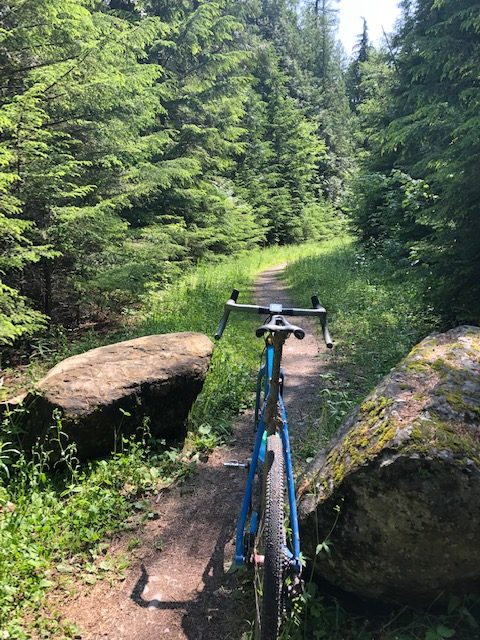 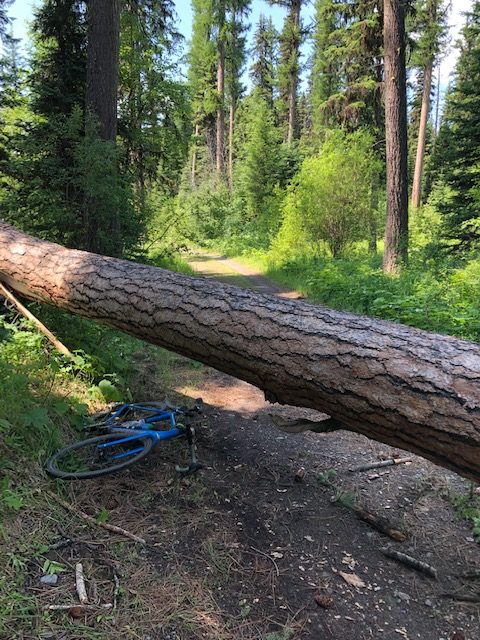 Check your speed or check your head! 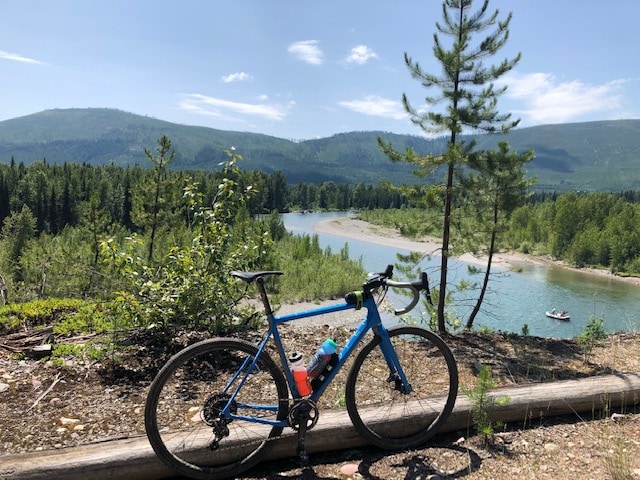 Overlooking the North Fork of the Flathead river. 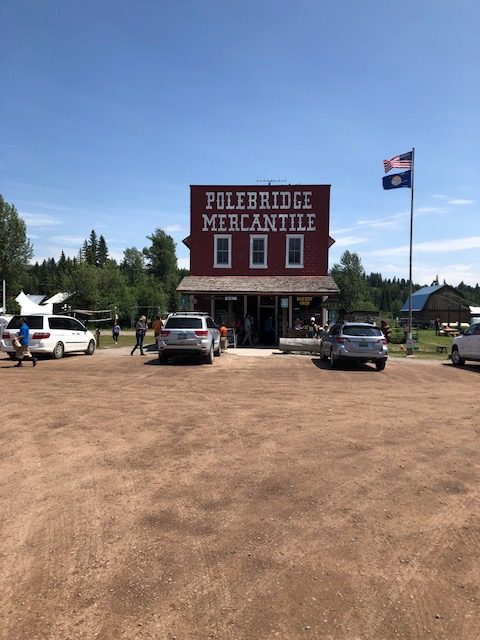 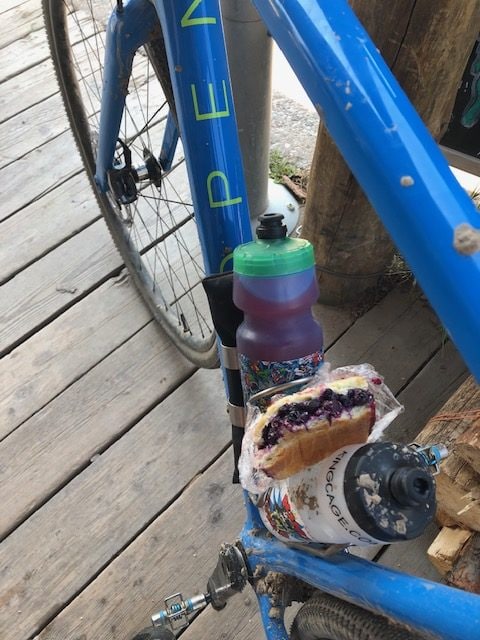 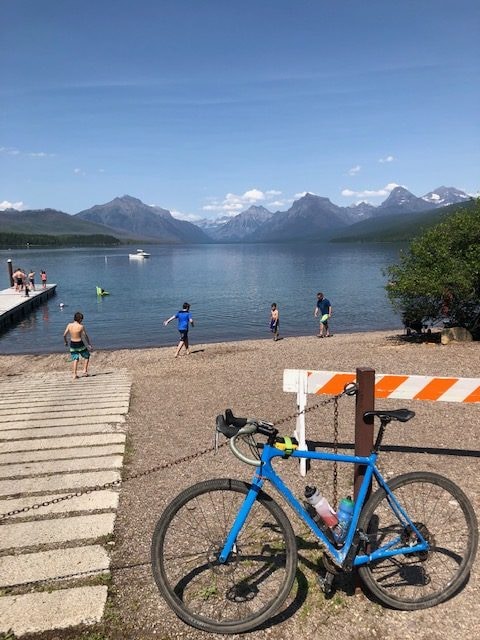 Lake McDonald for a swim ... at the finish.

A rugged and remote ride in Glacier National park. It bumps and bends through historic burn areas, wetlands and aspen groves. Then parallels the Flathead river for miles. By Guest Contributor and unridden by Team DF.

Glacier National Park may be best known for its 20+ named glaciers, but anyone who has visited remembers the vast scenery composed of its alpine forests, abundant streams, and fault-block mountains framing deep blue lakes. These features can be taken in on two wheels while riding Inside North Fork Road along the park’s western boundary.

The Inside North Fork Road is a rugged route that extends from Apgar to Polebridge and nearly to the Canadian border …. it bumps and bends through historic burn areas, wetlands and aspen groves to Logging, Bowman and, finally, Kintla lakes.

The historic Inside North Fork Road was built in 1901 and is the oldest road in the park. The Butte Oil Company initially built it as a rough wagon road from Lake McDonald to its oil well at Kintla Lake. It preceded the park’s establishment by 9 years. The more popular portion to ride is the southern half from the campground to the village of Polebridge. Because 10 miles of the road is closed to motorized vehicles, it receives very little traffic, even during the park’s busiest days.

The road between the Camas creek trail and the Logging creek campground has been closed to motorized traffic since 2014. It was open intermittently from 2006-2013. Still, it was decided to indefinitely close the section due to the repeated cost of necessary repairs from seasonal flooding damage and the impact on critical Bull Trout habitat.

June – September. Outside of this, conditions may not be favorable for riding. September has less people in the park and cooler temps.

Full time dad, full time doctor, part time bike racer, all the time bike enthusiast. I have lived the last 7+ years in Bend, OR but went to high school and spent much of my youth in the Flathead Valley of Montana.

Start at the Apgar visitor center. Take the paved bike until you reach Camas Rd and then go right. After you cross McDonald Creek, take another right onto Grist Rd. Try to control your jealousy as you bike by some of Glacier’s only privately held homes that were grandfathered into the park long ago. At the end of Gist Rd continue straight onto a short section of hiking trail.  This will be the only single track of the day. Take a right onto Fish Creek Campground Rd. At mile 2.3 you will enter the campground, stay left and you will quickly be onto Inside North Fork Road.

Apgar Village takes its name from Milo Apgar, an early settler in the Lake McDonald area. In the 1890s, Apgar along with Frank Geduhn and Charlie Howe built homes at the lower end of the lake with the intention of farming the area. Farming proved impractical, so they and other settlers quickly became involved in servicing tourists visiting the park. As these services increased, the village that grew up around them gained the name Apgar.

The only sustained climb of the day starts when you enter the campground. From miles 2.3 to 6.1 you will climb approximately 700 feet. After leaving the campground you will soon emerge from the forest into an old burn area with smaller trees and distant mountain views. Soon after finishing the climb you re-enter the alpine forest and transition from maintained gravel to hard pan dirt. The road is closed to motorized vehicles between miles 9-19.

The rest of the northbound journey is rolling hills but with a couple notable short, steep, loose descents.  These occur just prior to Dutch Creek and Anaconda Creek. For portions of these descents the road is covered with large, loose, river rocks that are prone to sliding downhill and can be tricky to ride. If you’re not comfortable it is better to walk. It is not worth an injury in remote grizzly country and you will not have cell phone service.  If you’re riding in June-early July the low points at Dutch and Anaconda creeks will be muddy with small depths of water flowing across the road surface. These creeks flood seasonally from snow melt. Don’t be surprised if you come across a number of logs crossing the road during the portion closed to motorized traffic, it receives sporadic and minimal maintenance.

Just prior to the Logging Creek Campground the road is open to motorized vehicles again. You will skirt a bluff overlooking the North Fork of the Flathead River before veering north to Quartz Creek Campground and then Winona Lake. The lake is small and beautiful but be warned, the mosquitoes are vicious!

At mile 27.4 take a left onto Glacier Drive. You will exit the park but it’s worth it. Stay straight on Glacier Dr and it will take you into the small village of Polebridge where you can fuel up at the Polebridge Mercantile & Bakery. They are particularly known for their huckleberry “bear claws” but have a wide range of delicious baked goods and meals.  The mercantile has abundant drink options include electrolyte sports drinks.

For the the return journey, there are two options. Continue back as you came, doing an out & back or do a loop using the (Outside )North Fork road. We have it mapped below as a loop.
Out & Back. The loose river rock descents are now leg and lung busting climbs, but both are under 1 mile long.

Once you’re back, swing through Apgar village to take in the quintessential Glacier NP views of Lake McDonald. I highly recommend a dip to cool off too, at least your tired legs!

The Inside North Fork Road continues north beyond Polebridge all the way to Kintla lake near the Canadian border. I’ve heard the road is rough and ruts are deep but have not done it myself. From Apgar, riding the entire length of the road northward, would be 42 miles and 3000 feet of climbing, one way.  See the Kintla Lake route for more details.